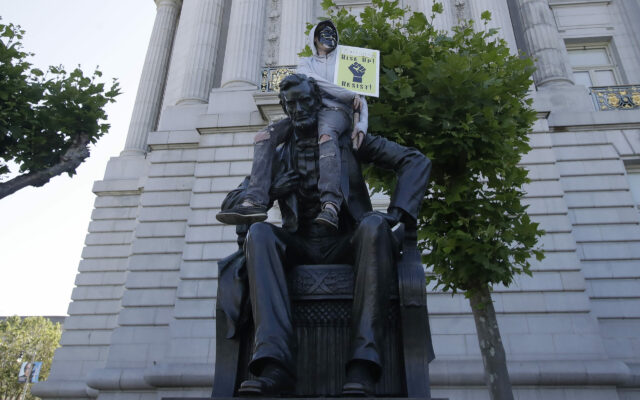 A person holds a sign while sitting on a statue of Abraham Lincoln outside of City Hall in San Francisco, Saturday, June 13, 2020, at a protest over the May 25th death of George Floyd who died after being restrained by Minneapolis police officers. (AP Photo/Jeff Chiu)

An investigation is underway after a statue of Abraham Lincoln in Chicago‘s Lincoln Park was vandalized.  The vandalism took place yesterday, with someone spray painting the statue with the word “colonizer.”  Red paint was also poured over the statue and “Dethrone the Colonizers,” “Land Back!” and “Avenge the Dakota 38” was spray-painted at its base.  An anonymous group claimed credit for the vandalism.  They claim they wanted to call attention to the public execution of 38 Dakota men during the U.S.-Dakota war of 1862.  Lincoln signed the order of execution.