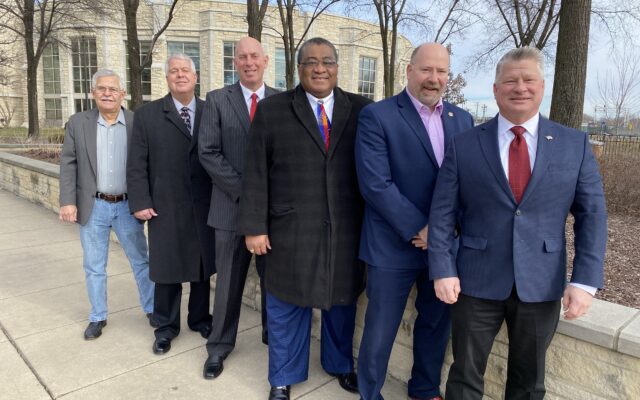 Dorris Gets Unanimous support from Joliet’s past five police chiefs.

Joliet’s past five police chiefs unanimously endorse Warren Dorris for Joliet City Council At Large. Dorris is the only council candidate who has received the unanimous endorsement from the retired chiefs.

Retired police chiefs Dave Gerdes, Fred Hayes, Mike Trafton, Brian Benton and Al Roechner have all thrown their support behind Dorris, calling him a man of honor and integrity.

Dorris calls for responsible police department reform and opposes how the O’Dekirk-Quillman administration has interfered with the department’s disciplinary process.

“Warren always puts Joliet first,” said Benton, who worked with Dorris for two decades before retiring in 2018. “I’ve always known him to be an honest man and a supporter of law enforcement.”

“Warren was always straight forward and honest with me,” said Trafton, who retired in 2013. “I fully support him.”

“With the loss of Mike Turk from the council, I was worried we were losing one of the council members whose integrity is second to none,” said Roechner, who retired last week. “I’m honored to endorse Warren Dorris for councilman at large because Warren will step right in where Mike leaves off and never compromise his honesty, integrity or ethics for anyone.”

“Warren worked very hard building trust between the police and the community,” said Hayes, who retired in 2011.

“Doing that, he greatly increased police accountability and transparency, which are critical to maintaining public safety and effective policing.”

“Warren always sought input from those most effected from an issue so he could make an informed decision,” said Gerdes, who retired in 2006. “Warren always kept the good of the city in mind when making decisions. He and I didn’t always agree, but he was always willing to sit down and talk things out, and ultimately make decisions that were best for the city.”

“To me he was a consensus builder in the community, and it was clear he didn’t just do the talk, he did the walk,” Hayes said. “He went above and beyond.”

Dorris will host a kick-off fundraiser meet-and-greet at The Dock at Inwood, 3000 W. Jefferson Street, on Tuesday February 2 from 5 to 8 p.m. The public is welcome to meet Dorris indoors or curbside pickup. For more information, visit the Facebook page “Warren Dorris From Joliet For Joliet.”