Joliet, IL. – September 19, 2019 – The Joliet Region Chamber of Commerce & Industry and The Council for Working Women are excited to announce Ines Kutlesa as the 2019 recipient of The ATHENA Award. Ines became the 32nd Award recipient, and was honored at a luncheon on Wednesday, September 18th, at the Jacob Henry Mansion Estate’s Victorian Ballroom.

The ATHENA Award Program was developed in 1982 to honor exceptional female or male leaders who demonstrate the highest levels of professional excellence, contribute time and energy to improve the quality of life for others in the community, and actively assist others, particularly women, in realizing their full leadership potential.

“To say that Ines embodies the criteria of this award would be a vast understatement,” stated Chamber President Mary Jaworski.  During her acceptance speech, Ines shared her inspirational personal and professional history to over 200 local business professionals.

Ines will be celebrating her 20th anniversary with Guardian Angel Community Services here in September of 2019. She has been promoted six times with the last appointment being that of Chief Executive Officer of the organization. In addition to CEO, Ines has held the title of COO, Senior Program Director, Directory of Clinical Services, Quality Assurance, Training and Child Welfare, Director of Community Based Programs, Director of Groundwork, and Program Supervisor of Groundwork.

Her impressive career includes program achievements such as the development of transitional housing for survivors of domestic violence, development of partner abuse intervention, and development of adult protective services. Her tenure has also overseen the successful relocation of the main office to downtown Joliet and the opening of three satellite offices.

Ines has many more achievements to share including being selected to the Illinois General Assembly Human Services Appropriations Committee to testify regarding the negative impact of the budget impasse on women and girls in the community, appeared on national television to be the voice and advocate for justice and the human rights of women and girls, and secured a grant for a storytelling project to reach those in the Latina community who are victims of domestic violence.

Most recently, Ines was appointed to Governor J.B. Pritzker’s Illinois Council on Women and Girls to advise the Governor and the General Assembly on policy issues and legislation that impacts women and girls across the State of Illinois. In July, Kutlesa was elected Chair of the Illinois Council on Women and Girls’ Gender Based Violence Committee.  She has a proven track record of fighting for women’s equality across all life domains and feels that if the fundamental human rights of women are not protected, then they cannot live freely, or safely, much less advance professionally.

Over the last 20 years, Ines Kutlesa has hired, mentored, trained, clinically supervised, advocated for, volunteered with, and promoted hundreds of women in both professional and academic settings.  She has strived to help women achieve academic and professional goals. In addition, she has worked tirelessly to expand programs and services and to increase funding. These accomplishments have led to the increase in employment of women, significant increases in salary, and have allowed women in the social service arena to be able to continue helping other women in desperate need, while earning a competitive salary and benefits package.

The work of Guardian Angel Community Services has allowed women to successfully reintegrate into the workforce to pursue their professional goals, helped with resume writing, coached through job interviews, linked to workforce resources, assisted with child care needs, provided financial management, and opened a “Career Closet” so they can dress for success. There are many more examples of the work that Ines has overseen that are impacting the daily lives of so many individuals.

A snapshot of additional community service and participation within the Joliet Region Chamber of Commerce:

“I have dedicated my life, and entire academic and professional career to advancing the status of women and girls locally, nationally, and internationally. I am forever grateful to the strong women in my life who have cared for, mentored, supported, and inspired me, as without them, these achievements would not be possible.” – Ines Kutlesa 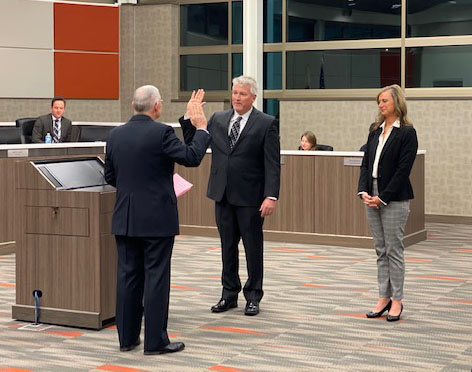 Frankfort Appoints New Clerk at the February 18 Village Board Meeting