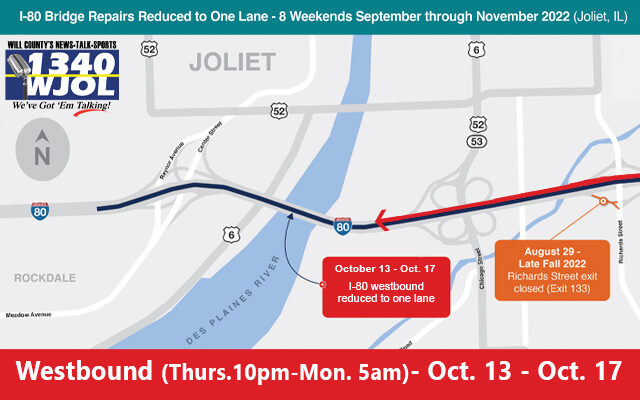 The Illinois Department of Transportation announced today that bridge deck patching and repairs to Interstate 80 between Raynor Avenue and Gardner Street, in Joliet, will require ramp and lane closures over multiple extended weekends. This is the sixth of eight planned weekend closures along the corridor.

Starting at 10 p.m. Thursday, Oct. 13, lane closures will take place on westbound I-80, between Raynor Avenue and Center Street. Additionally, the westbound I-80 ramp to Chicago Street (U.S. 52/Illinois 53) will be closed, as well as the Chicago Street (U.S. 52/Illinois 53) ramps to westbound I-80. During that time, motorists should follow the posted detour to access the expressway. At least one westbound I-80 lane will remain open at all times and eastbound I-80 will not be impacted. Westbound I-80 motorists traveling through the region should consider alternative routes to avoid the area. Local streets are unable to accommodate heavy or wide trucks, so other interstate routes are encouraged. The ramps and all lanes are anticipated to reopen by 5 a.m. Monday, Oct. 17.

Westbound traffic stacked up to Route 30 in New Lenox with the lane closure in Joliet.

To complete the project, additional extended weekend lane and ramp closures are scheduled to take place, from 10 p.m. Thursdays to 5 a.m. Mondays, alternating between westbound and eastbound I-80 for approximately two additional consecutive weekends, weather permitting.