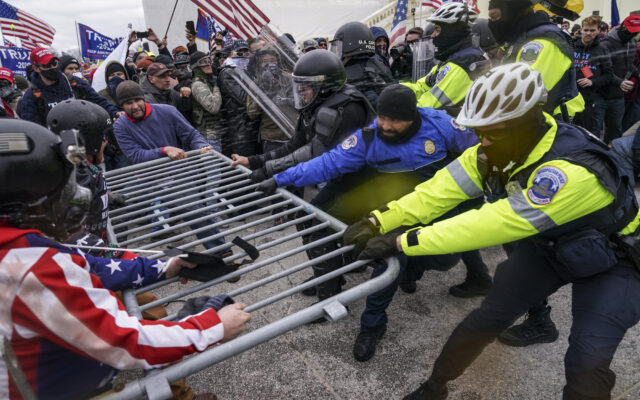 Trump supporters try to break through a police barrier, Wednesday, Jan. 6, 2021, at the Capitol in Washington. As Congress prepares to affirm President-elect Joe Biden's victory, thousands of people have gathered to show their support for President Donald Trump and his claims of election fraud.(AP Photo/John Minchillo)

The Sergeant-at-Arms says the Capitol building is now secure.  The Sergeant-At-Arms made the announcement to pool reporters.  Supporters of President Trump stormed Congress this afternoon as members were certifying the results of the presidential election.  At least one person is dead after being shot in the chaos.  Police and National Guard used flash bangs and tear gas to regain control of the building.  However, it came after protesters made it inside both chambers of Congress.

Congress Bill Foster talks to WJOL about the violence at the U.S. Capitol.

Police in Washington, D.C. have set up a perimeter in front of the U.S. Capitol after protesters stormed the building this afternoon. Thousands of people were inside the building and on the Capitol steps for hours before being cleared by police using tear gas and flash grenades. Buses of police have arrived on the scene and the National Guard has been called up. One woman was reportedly shot and killed inside the Capitol. The FBI has confirmed it secured two suspected explosive devices near the building. The nation’s capital is now under an overnight curfew to prevent more violence. 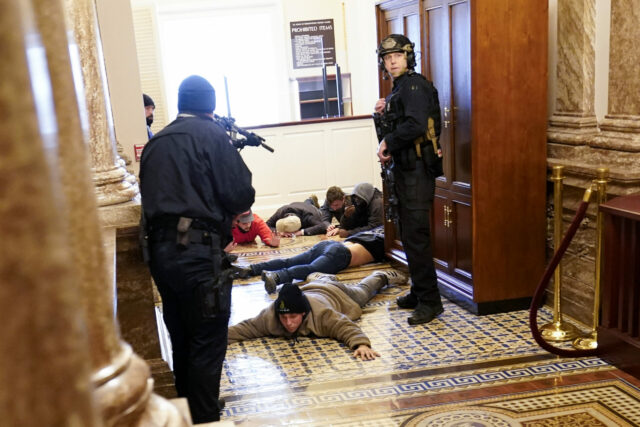 U.S. Capitol Police hold protesters at gun-point near the House Chamber inside the U.S. Capitol on Wednesday, Jan. 6, 2021, in Washington. (AP Photo/Andrew Harnik)

Some of the potential threats of pipe bombs across D.C. ended up being real. Authorities found at least two pipe bombs, one at the building that houses the Republican National Committee offices and another in the U.S. Capitol complex. The official said these were real explosive devices and they were blown up to be rendered safe. The threat of pipe bombs has come after Trump supporters stormed the U.S. Capitol during the certification of the Presidential Election.

Police in Washington, D.C. say four people died during Wednesday’s protests at the U.S. Capitol.  One of the deaths was a shooting inside the Capitol and three others were medical emergencies that happened in the vicinity of the Capitol.  Pro-Trump protesters stormed the Capitol building, forcing Congress to evacuate as they were in the process of counting the electoral college votes.

Congresswoman Ilhan Omar says she’s writing articles of impeachment against President Trump following violence at the U.S. Capitol. The Minnesota Democrat tweeted, “We can’t allow him to remain in office.” Trump has already survived one impeachment attempt during his presidency. His supporters stormed the Capitol as both the House and Senate were meeting to ratify the presidential election results. Joe Biden will be sworn in as the nation’s next President on January 20th.