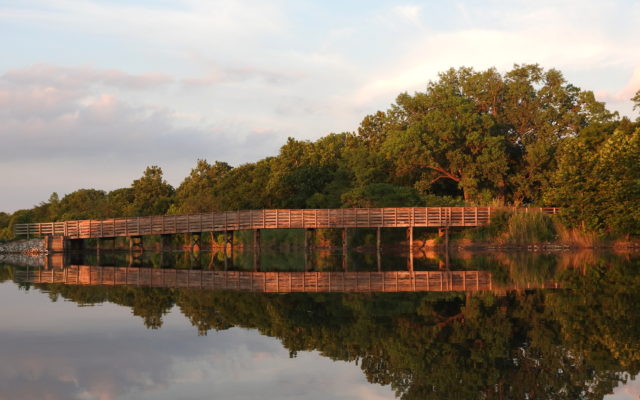 The photo, taken by Paul Wenger of New Lenox, shows the preserve’s 136-foot-long timber bridge perfectly reflected in the water below. Wenger said he recently bought kayaks and this was his very first outing with them. “As we were paddling back in around sunset I noticed the beautiful colors and the reflection in the water and thought, this would be a great picture,” he said in an email after being notified of his win.

Honorable mention photos for July were taken by: Matthew Serafini of Lockport for an osprey diving in for a landing at Lockport Prairie; Byron Morgan of Crete for a shot of a russula mushroom perched on the forest floor at Goodenow Grove Nature Preserve; and David Kowalski of New Lenox for a breathtaking shot of storm clouds swirling in Hickory Creek Preserve. You can view all of July’s photo contest entries on the Forest Preserve District’s Flickr page, Flickr.com/WillCoForests.

Photos must be taken by amateur photographers age 18 or older, and they must be snapped in a Will County forest preserve after the May 1 contest start date. Please read all the photo contest rules and upload instructions at ReconnectWithNature.org before entering the contest.