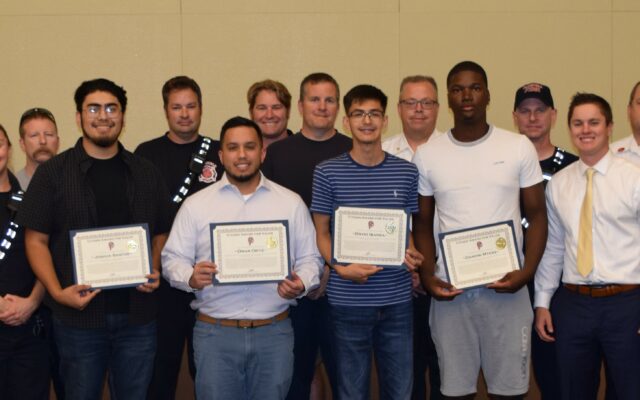 Five bystanders and multiple first responders were recently recognized by the Plainfield Fire Protection District for their efforts during a water rescue back in June. On June 4, 2021 at 7:25 pm the Plainfield Fire Protection District was dispatched to the Plainfield Fishing Club, 22850 W. Renwick Road for a report of a possible drowning. While on the way to this location updated information was provided saying that there were two people in the water. The five bystanders, the Sheriff’s Deputies and Police Officer entered the water prior to Fire District personnel arriving on scene and began rescuing two unconscious people in the water. Bystanders along with responders were able to rescue the 31-year-old as well. The bystanders are Joshua Santos, David Ibarra, Damoni Myers, Omar Ortiz, and Sebastian Barraza. Ricardo Robles is a member of the Plainfield Police Department and Will County Sheriff’s Deputies Daniel Budde and Derek Albin were also honored.