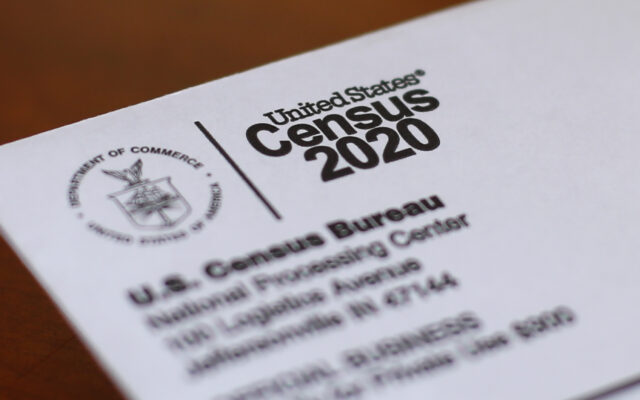 FILE - This April 5, 2020, file photo shows an envelope containing a 2020 census letter mailed to a U.S. resident in Detroit. The Supreme Court’s decision to allow the Trump administration to end the 2020 census was another case of whiplash for the census, which has faced stops from the pandemic, natural disasters and court rulings. (AP Photo/Paul Sancya, File)

All but 15 of Illinois’ counties lost population over the past ten years, according to the latest U.S. Census data released Thursday.

Census data released earlier this year was only by state totals, not data on a local level. The outcome for Illinois was the state losing one congressional seat because of population decline. More detailed data was released Thursday by the U.S. Census.

Marc Perry, senior demographer in the bureau’s Population Division, identified a trend across the country during a news conference Wednesday where more detailed Census data was released.

The data, analyzed by the Center for Governmental Studies at Northern Illinois University, shows Chicago gained population by around 50,000. In addition, Cook County grew by more than 80,800.

Kendall County grew at the fastest rate of nearly 15%, or more than 17,100 people. Monroe and Johnson counties grew by more than 5%. Every other county grew less than 5%, with the most losing population over the decade.

“The remaining 87 counties experienced population decline,” said NIU demographer Sherrie Taylor. “Alexander lost the greatest proportion of their residents at 36.4%, more than twice the next county as well.”

In general, across the country, Perry said people are moving to larger cities.

Illinois is the only state in the midwest and only of three states overall to lose population, decreasing by 18,124 over the decade. That’s different from the 2019 estimates of the state losing nearly 169,000 people.

Policymakers, demographers and analysts are now unpacking the latest data.
Michael Cook with the U.S. Census said policymakers will now use the data to make key decisions on how to best spend taxpayer resources.

“Local leaders who chose to use this data may make decisions such as where to build roads and hospitals and even how to respond to natural disasters and future pandemics,” Cook said.

The Census says they plan to release more information in the weeks ahead, including different forms of data in an easier to use format.

Illinois state lawmakers must now use the data to redraw congressional boundaries. Gov. J.B. Pritzker had said the state might have to update legislative maps he already approved when the new data is released. Legislative maps based on estimates released months ago are being challenged in court.