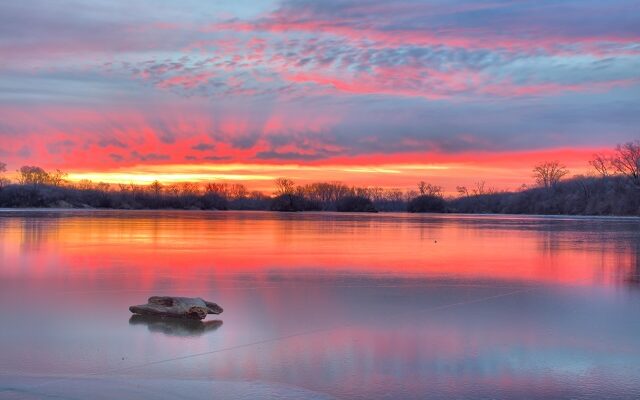 The winning shot featured the golden glow of the sun sandwiched between blue-gray ice and clouds at Lake Renwick Preserve in Plainfield. The photo was deemed the best for the month of December and then won top honors in the overall contest competing with seven other monthly finalists in online voting this month.

Coming in second in the overall contest was Matthew Serafini of Lockport for his photo of a yellow-crowned night heron snacking on crawfish at Whalon Lake in Naperville. In third place was Naperville resident Bertrand Leclercq for his close-up of a praying mantis at Riverview Farmstead Preserve in Naperville. All of the 2020 contest entries can be viewed on the Forest Preserve’s Flickr page, Flickr.com/WillCoForests.

Kuchler, Serafini and Leclercq will receive MasterCard gift cards worth $500, $250 and $150, respectively. The photo contest is sponsored by The Nature Foundation of Will County, willcountynature.org.

The contest ran from May through December with a panel of judges choosing one winning picture for each month. Once the eight monthly winners were in place, final contest voting took place via the District’s Facebook page, Facebook.com/WillCoForests. More than 1,500 votes were cast online to narrow the eight monthly winning photos to three final contenders. In the last round of voting, Kuchler’s sunrise photo was deemed the best of the best.

Kuchler said he loves taking sunrise and sunset photos in the preserves and has been doing so since 2010. The day he took the winning shot, he and his wife ventured out early and walked the trail along the water’s edge until the sun emerged from the horizon.

“I am so excited! There were great photos taken this year and I can’t believe that my photo won,” he said via email after being notified of his win. “The praying mantis and the heron eating the crawfish were amazing photos.”

Kuchler said he loves landscape photography because he can capture the beauty of the world around him.

“The earth has such amazing places and to be able to capture those places and share them with people is something that I love to do,” he said.

He explained that winning the contest will provide more motivation to get outside and take photos and he will use a portion of his prize money to get a new camera bag. The contest was a much-needed stress reducer in 2020, he added.

“2020 I think was tough for just about everyone,” Kuchler said. “Walking through the preserves in such a peaceful environment, you really were able to forget about all the craziness going on and just relax.”

The Forest Preserve received 1,092 photo entries from 467 individuals, the most since the contest began in 2016.