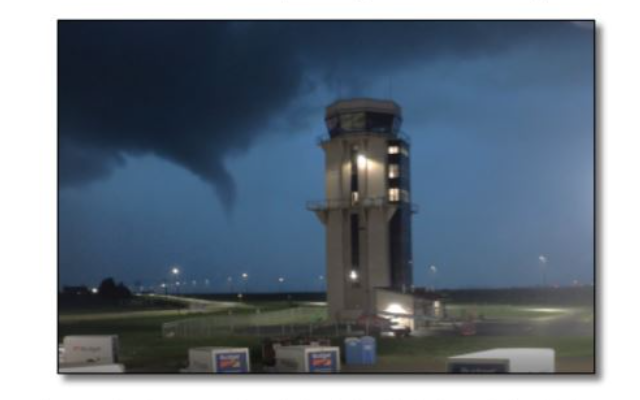 The National Weather Service has an incredible picture of a tornado passing near Lewis Airport. Storms that began on the night of July 22nd through the 23rd brought heavy rain, large hail and damaging wind gusts before dropping three tornadoes in Will County.

During the overnight hours of Friday, July 22, thunderstorms developed across portions of Winnebago, Boone, McHenry, and Lake counties. These initial thunderstorms trained, or re-developed continuously over the same area, for several hours which led to significant flash flooding across parts of Lake County. As these storms move to the SE, they dropped copious rainfall over these same counties with parts of Lake and McHenry quickly picking up 2-5+ inches of rain due to the PWAT values in excess of 1.5 inches during the overnight hours. In addition to the heavy rain, the storms initially dropped hail up to 1.75 inches in Lake and McHenry Counties accompanied by strong winds which brought down trees and damaged roofs in the path of the storms.

More storms began to fire near the Freeport/Rockford area and moved towards the southeast. These storms sporadically dropped large hail and produced some scattered damaging wind gusts near the I-88 corridor. Eventually, as the storms continued to congeal together near daybreak, they developed into a Quasi-Linear Convective System (QLCS) with some embedded rotation within the line. One of these areas of rotation went on to produce a cyclic path of 3 brief tornadoes that moved to the south through DuPage and Will County. In the process, these storms continued to produce scattered strong wind and large hail reports as they moved off the east and southeast. While the initial storms moved out of the area, they left a boundary upon which more storms developed through the morning and early afternoon hours. These storms led to rainfall totals on the higher side stretching from Joliet to Rensselaer and led to a few reports of hail reaching 0.5 inches.

As the previous storms died off and moved out of the region, it was quiet within the area until late night when the final round of storms arrived from the west. This round of storms were a bit weaker than the previous rounds of storms but still produced a handful of damaging wind gusts and added to the high rainfall totals in already soaked areas.