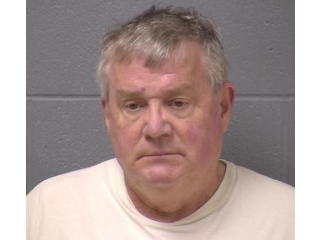 A 72-year-old convicted felon has been sentenced to 25-years in prison after a 2016 home invasion. William McGuire Jr. was sentenced on Monday by Judge Daniel Rippy following his conviction in a bench trial in February of 2022. It was back on September 28, 2016, the victim was in her home in Bolingbrook when she observed McGuire at her front door. When the victim opened the door, McGuire forced his way into her home with a weapon and grabbed her. The victim was able to free herself from McGuire’s grasp and run to a neighbor’s house to call 911.  During the entry, McGuire wore sunglasses, but was identified by the victim as the perpetrator with whom she had just observed at Jewel. Surveillance footage from Jewel was acquired showing McGuire at Jewel shortly before the attack.

As part of today’s sentencing hearing, the State flew in one of McGuire’s previous victim’s from Arizona who testified about the assault she suffered at the hands of the defendant back in 1973. McGuire Jr. was officially convicted of one count of Home Invasion, a Class X felony and one count of Criminal Trespass to Residence, a Class 4 felony.