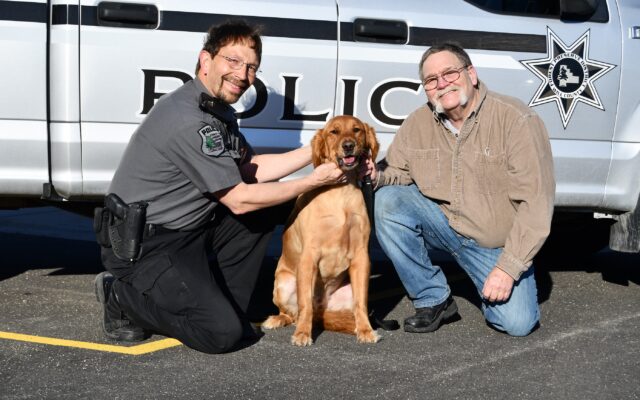 Forest Preserve District of Will County Police Officer Dan Rankovich and Frankfort resident Kim Jones pose with Jones’ dog Rocco, who ran out onto the ice at Monee Reservoir on March 5 and was rescued from the frigid water by Monee firefighters with assistance from Rankovich. (Photo by Forest Preserve staff | Glenn P. Knoblock)

Kim Jones was taking a winter stroll at Monee Reservoir recently with his golden retriever Rocco when the dog became tangled in his leash.

When the Frankfort resident unhooked the dog for a moment to untangle the leash, the dog saw some geese on the ice and began to chase them. He made it around 250 feet out onto the frozen lake, but the ice broke and he fell into the frigid water at around 5:40 p.m. March 5.

Rocco was rescued and is doing fine, but the incident serves as a warning for everyone to be wary of water and ice and to keep your pets leashed at all times.

Cold but alive
Jones called 911 and Forest Preserve District of Will County Police Officer Dan Rankovich, who was in the vicinity, arrived quickly and helped Jones and his pup through the ordeal.

Monee firefighters arrived a short time later to rescue the dog, and Rocco was pulled from the lake, cold but alive, around an hour after he plunged through the ice.

Jones was so appreciative of everyone’s efforts, he and Rocco have made personal stops at both the Monee Fire Protection District fire station and the Forest Preserve District’s police station to thank all involved.

“That guy is just a blessing,” Jones said of the Forest Preserve’s Rankovich. “He coordinated with the fire department and let them know what was happening. And he was on the bank screaming, ‘Rocco keep your head up, keep your head up.’”

Rankovich, a former Mokena police officer, also kept the dog’s owner from trying to enter the water in a boat, which could have been dangerous and put Jones in jeopardy.

“Officer Dan took charge and he let the fire department know where the dog was at,” Jones said. “Dan was just awesome.”

Rankovich said the initial call was that the dog was on the ice, but when he arrived at the scene, he saw it had fallen through into the water.

Icy endeavor
The credit for the rescue goes to the firefighters who entered the water, Rankovich stressed.

“They just kept suiting up guy after guy to get to the dog,” he said. “They were running out of guys on shore.”

Four firefighters entered the water in ice rescue suits and Rankovich and others on shore were holding ropes that were tied to the rescuers. According to the fire department, “The ice conditions were very unpredictable and required the rescuers to break their way thru the ice to gain access to the dog.”

Rankovich said conditions were rough because the ice was too thin to hold the weight of the firefighters, but it was too icy to swim through so it was tough going.

“Those firefighters really worked their butts off to get to the dog,” he said. “They really struggled.”

Monee Fire Chief Carl Nieland said his firefighters had to rotate as a team through the water using their body weight and ice picks to break through the ice to get to the dog.

“They exhibited 110 percent effort in reaching that dog,” Nieland said.

After the dog was pulled from the water, firefighters handed the cold canine to Rankovich and he brought the dog to Jones. Jones said when he fell trying to carry Rocco to his truck, the dog ran the rest of the way, which showed he was going to be OK.

Jones cranked the heat up in his truck and Rocco sat wrapped in a blanket provided by Jones’ friend Sand Lucca, who was on the phone with the vet getting advice about the dog’s treatment. The vet advised Johnson and Lucca to keep the dog warm and to watch him to make sure he was recovering. Rocco spent part of the night with Jones by a toasty fire and required no extra care.

Lucky dog
The ordeal has left Jones shaken, though.

“You can’t imagine the feeling of seeing the dog in the water and hearing it whining and you can’t do anything to help,” he said.

Jones adopted the 2-year-old dog a year ago from a Peoria shelter. The pup is “full of life and almost always on the go,” Jones said. “He’s just a good-natured dog. But the next time he gets tangled up, I won’t undo his leash.”

Between the firefighters going into the icy lake and Rankovich assisting and coordinating, Jones said he realizes just how lucky he and Rocco are.

“I just couldn’t have a had a better experience for a terrible situation,” he said.

Chief Nieland said the incident is a warning to others. The thickness of ice can be unpredictable because of many factors including schools of fish, underwater springs and natural discharges, he said. So it’s best to always use caution.

“Stay off the ice and keep your pet on a leash, especially when you are around water or ice,” he advised. “Your pet might be of a nature to chase wildlife, be it a deer or a goose. And a lighter weight dog can get a lot farther out on ice than a human before breaking through.”