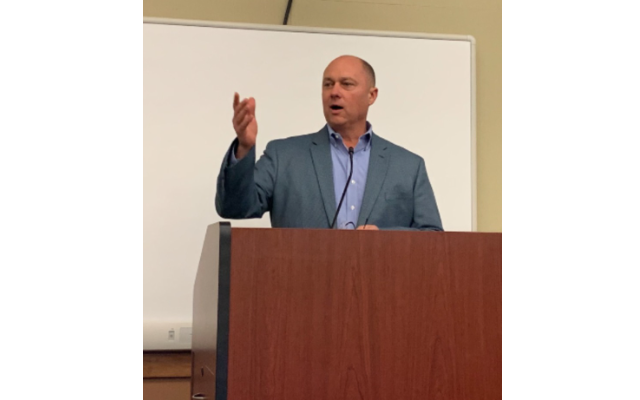 Eric Mattson, a Joliet native and firefighter for 26 years, has been appointed to the Illinois State Senate from the 43rd Legislative District, replacing retiring State Sen. John Connor, who resigned effective April 30 to take care of a family member. Following the appointment, State Sen. Eric Mattson was sworn in by Chief Judge Daniel L. Kennedy of the 12th Judicial Circuit of Illinois.

The appointment follows a rigorous process that included six applications to the seat from interested community members. The appointment was made earlier today by a vote of the Democratic county chairs of the territory of the 43rd district, which includes portions of Will County (Chair Burke Schuster) and DuPage County (Chair Ken Mejia-Beal).

“I want to thank everyone who applied for this appointment. I appreciate the time and effort each of them put forth,” Schuster said. “The Will County Democratic Central Committee
looks forward to working with the new senator.”

For his part, Will County Democratic Chair Schuster appointed an advisory committee made up of residents from the affected townships to assist in his decision.

A veteran firefighter and union president from Joliet Fire Officers Local 2399, which represents Joliet firefighter supervisors, Mattson serves as president of the Joliet Firemen’s Pension Board of Trustees and has also held leadership positions in a number of community organizations, including the Salvation Army and Will County Habitat for Humanity.

Illinois state statute required that the appointment be made within 30 days of the vacancy.

Mattson is running for a full term in the newly-drawn 43rd Legislative District this year.