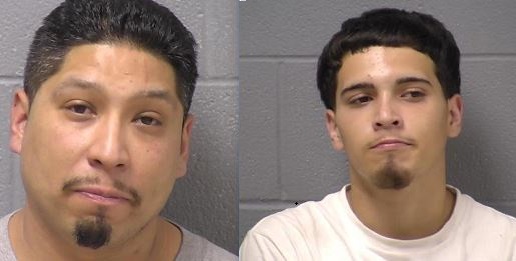 A father and son have been arrested in connection to a shooting in Braidwood. It was on Sunday night that Braidwood Police were called to the 100 block of North Division Street at 6:00am after receiving a report of shots fired in the area. Officers discovered a bullet hole in a house near the reported shooting and learned that four people were inside the house but no one was injured in the incident. The firearm, described by the Braidwood Police as a 9mm “Ghost Gun,” also contained an extended 21 round magazine. Officers were able to link 20-year-old Gabriel Alvarez and 40-year-old Joseph Alvarez to the shooting. Braidwood Police have stated that Joseph Alvarez allegedly made incriminating statements regarding discharging a firearm. Gabriel Alvarez was taken into custody on nine different felony charges including unlawful possession of a handgun and obstruction of justice. Joseph Alvarez has been charged reckless discharge of a firearm and felon in possession of a firearm.