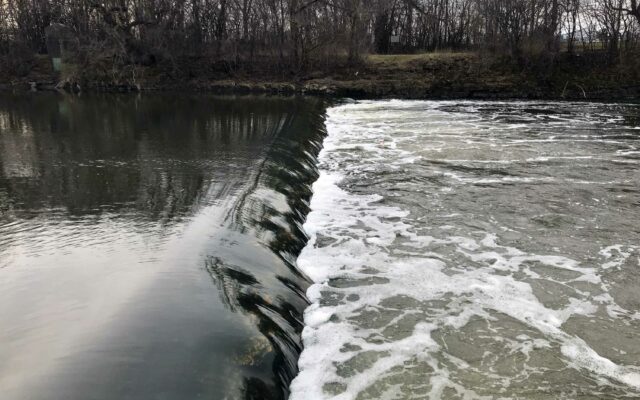 Actional taken Thursday, Oct. 8, by the Forest Preserve District of Will County’s Board of Commissioners will lead to the removal of the Hammel Woods Dam in Shorewood. The dam was built in the 1930s by the Civilian Conservation Corps and planning to remove the dam to improve the health and safety of the river began in early 2019. (Photo by Forest Preserve staff | Chad Merda)

Action taken Thursday, Oct. 8, by the Forest Preserve District of Will County’s Board of Commissioners will lead to the removal of the Hammel Woods Dam in Shorewood. Semper Fi Land Services Inc. was hired to remove the dam, WBK Engineering LLC will oversee the work and the Lower DuPage River Watershed Coalition has agreed to pay for the removal. The removal process cannot begin until permits for the work have been approved by all necessary regulatory agencies. The work will take place in two stages with half the river water at the project site being drained during each phase using water storage cofferdams, said Andrew Hawkins, the Forest Preserve District’s director of planning.

If the permits are in place this fall, the work could take around a month because water levels are lower, Hawkins said. If the permits are delayed and work begins in the spring, the project could take longer due to higher water levels, he explained. Other factors also could affect the timeline. The portion of the stone dam that rises above the river bottom will be removed, but the stone footings below the river bottom will remain. After the dam is taken out of the river, natural river rocks will be added near the banks to create “riffles” that will oxygenate the water. In spring 2021, native vegetation will be planted to stabilize the riverbank.

The work will return the river to a more natural, healthier state, and it will make the river safer for paddlers because they will no longer have to portage around the dam. While the dam is being removed, a new canoe/kayak launch will be built downstream of the current launch on the DuPage River. The old launch will then be removed. The Hammel Woods Dam was built in the 1930s by Civilian Conservation Corps workers. The 4-foot-high concrete and limestone dam was built to create a pool of water for recreational purposes during a time when the DuPage River had a much lower volume of water than it does now.

In 2003, The Conservation Foundation studied five dams along the river, including the Hammel Woods Dam, looking for ways to improve the ecology of the river. The study concluded that removal of the Hammel Woods Dam would allow aquatic species to move upstream and improve safety. In 2011, the foundation completed a two-year watershed-based plan for the DuPage River, which led to the creation of The Lower DuPage River Watershed Coalition in 2012. The coalition’s goal is to preserve and enhance water quality in the river and its tributaries. The coalition also looks for ways to help communities along the river comply with more stringent U.S. Environmental Protection Agency requirements related to wastewater treatment plants discharging into the river. The Forest Preserve District joined the coalition, which is made up mostly of municipalities that discharge into the river, ranging from Bolingbrook in the north to Channahon in the south. In 2017, the coalition paid for a study of the pros and cons of either modifying or removing the Hammel Woods Dam. Dam removal was recommended, but the amount of funding needed was not yet available to move forward with the plan.

In February 2019, the City of Naperville received a new wastewater discharge permit from the EPA and as part of that process, it had to pay fees to the coalition for river-related enhancements. That money was earmarked for the Hammel Woods Dam removal and the planning process began in spring 2019.