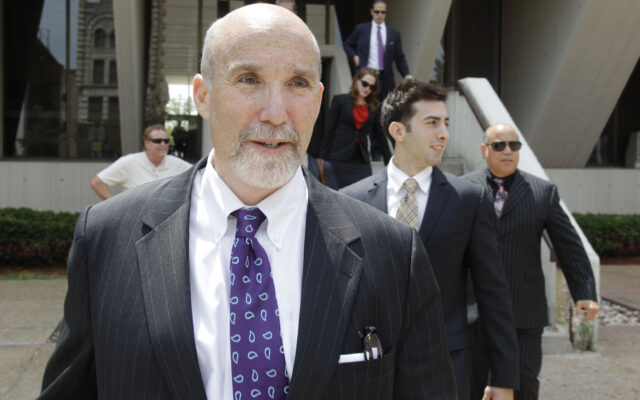 Joel Brodksy, attorney for former Bolingbrook police officer Drew Peterson, leaves court for lunch during the first day of jury selection in Peterson's murder trial, Monday, July 23, 2012, in Joliet, Ill. Peterson, 58, is charged with killing his third wife, Kathleen Savio, in 2004. Her body was found in a dry bathtub in her home, her hair soaked with blood. The ex-Bolingbrook police sergeant is also a suspect in the 2007 disappearance of his fourth wife, Stacy Peterson. (AP Photo/M. Spencer Green)

Drew Peterson, the former Bolingbrook police officer serving time for killing his third wife, asked a judge to silence his former attorney Joel Brodsky and a judge granted the motion Thursday. The gag order comes after Brodsky told a Chicago television station he was considering revealing what happened to both of Peterson’s wives. Peterson’s fourth wife Stacy disappeared in 2007 and has never been found.