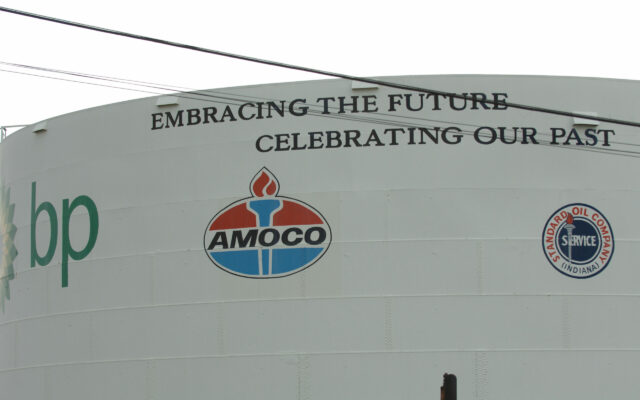 This Sept 7, 2007 file photo shows the one of the tanks at the BP Refinery in Whiting, Ind. featuring various logos of the company. The refinery about 20 miles southeast of Chicago is nearing completion of a $3.8 billion upgrade to make it a top processor of high-sulfur crude from Canada's tar sand deposits. The Natural Resources Defense Council says the revised wastewater permit drafted by Indiana regulators lacks sufficient provisions to protect the lake from wastes from processing of that oil, which they say contains elevated levels of impurities. (AP Photo/Joe Raymond, File)

Governor Pritzker announced today that his administration has taken steps to proactively address a shutdown at a BP facility in Whiting, Indiana caused by an electrical fire. Illinois, along with Indiana, Michigan, and Wisconsin, requested and were granted an emergency waiver of federal fuel regulations from the United States Environmental Protection Agency (EPA).

“After learning of the electrical fire at the BP facility in Whiting, our administration has taken proactive steps to increase gas supply and reduce barriers so all Illinoisans have access to the fuel they need,” said Governor JB Pritzker. “This coordinated effort with our neighboring states will reduce the chance of disruptions and keep the people and businesses of Illinois moving.”

The temporary waiver, which was granted through September 15, 2022, allows for high volatility gasoline to be sold during the summer months, reducing fuel disruptions following the fire which broke out on August 24. The waiver also means that Illinois corn farmers will provide the needed fuel through their ethanol production, which is a lower emission alternative to gasoline produced without ethanol.

“The Illinois agricultural and ethanol industries are poised to help motorists maintain a steady supply of liquid fuel in the face of the tragic burning of the BP refinery in Whiting, IN. Because locally grown and produced biofuels can displace a large percentage of petroleum fuel, motorists can feel confident that they are not only purchasing an available, safe, high-quality fuel, but also that they are saving money at the pump and cleaning the air when they drive. Ethanol has 40-45 percent fewer greenhouse gas emissions than gasoline without ethanol, making this interim change to include more biofuels in our fuel supply a positive one for the environment. Illinois corn farmers hope Midwest consumers will be pleased at the price and the emissions when they fill up with E15 fuel,” said Marty Marr, President of the IL Corn Growers Association.

The Whiting BP facility produces 430,000 barrels-per-day and provides fuel to neighboring states. No deaths or injuries were reported and the fire was successfully extinguished, but damage to the facility led to the partial shutdown.

“BP is keeping us informed on their restart process as they safely protect their crews, responders, and the public,” said Illinois Emergency Management Agency (IEMA) Director Alicia Tate-Nadeau. “We will continue to work with our local and state agencies to monitor the impacts.”