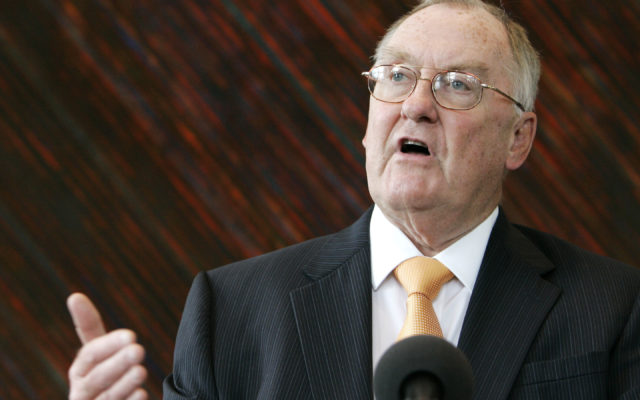 FILE - In this Aug. 21, 2007 file photo, former Illinois Gov. Jim Thompson, pauses before beginning a news conference in Chicago. Thompson, known as “Big Jim” during a long career that eventually made him the state's longest-serving chief executive, has died. He was 84. Thompson died Friday, Aug. 14, 2020 at the Shirley Ryan AbilityLab in Chicago, his wife, Jayne, told the Chicago Tribune and the Chicago Sun-Times. (AP Photo/M. Spencer Green, File)

Governor JB Pritzker issued a proclamation today declaring a statewide day of remembrance in honor of the passing of former Governor James ‘Big Jim’ Thompson and the launch of a virtual guidebook for Illinois residents to electronically sign and share their favorite memory of Illinois longest serving governor. The virtual guestbook can be found online here.

“Today, as a state, we mourn the passing of former Governor Jim Thompson and I invite residents across the state to sign the virtual guestbook with their favorite memory of Governor Thompson,” said Governor JB Pritzker. “’Big Jim’ lived a big life and got big things done for Illinois. But perhaps most importantly, he was a kind and decent man who set the standard for what public service can and should look like in our state. May his memory be for a blessing.”

James R. Thompson, known to Illinoisans as Big Jim, served as the state’s governor from January 1977 to January 1991, a total of fourteen years. Thompson first came to prominence when he was U.S. attorney for the Northern District of Illinois, and especially when he successfully prosecuted former governor Otto Kerner on corruption charges. During his long tenure as governor, he developed a reputation as a moderate Republican who was a fiscal conservative, but also a friend of labor and a builder, with Build Illinois being his administration’s signature achievement. He traveled the world promoting Illinois and its products. He also had a passion for history and antiques, and thus created the Illinois Historic Preservation Agency in support of those passions. Following his many years in office, he worked in the private sector, serving as the chair of the important Chicago law firm, Winston and Strawn for many years. He also found time to serve on the 9/11 Commission. Thompson maintained a high profile and was a highly popular figure, and he will always be remembered and revered as one of the titans in the history of state government.