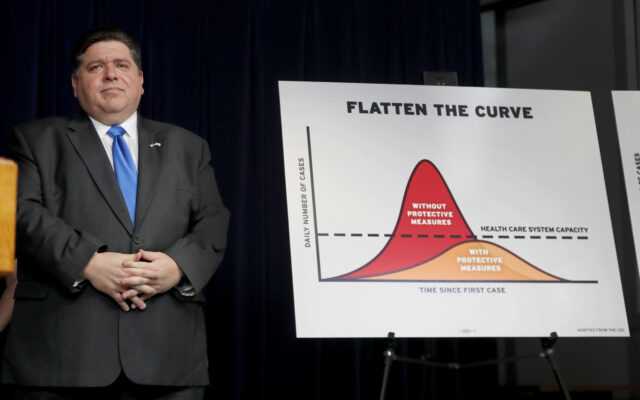 Illinois Gov. J.B. Pritzker listens to a question after announcing a shelter in place order to combat the spread of the Covid-19 virus, during a news conference Friday, March 20, 2020, in Chicago. (AP Photo/Charles Rex Arbogast)

Some lawmakers want a review of how he’s handled the COVID-19 pandemic.

Pritzker recently told the State Journal-Register he will make a pandemic playbook for successors.

“[T]here had been no national strategy that had been communicated to the states about how to deal with a pandemic,” Pritzker said. “I think coming out of this, all of that will change. … We will make a pandemic playbook for successors of mine in the future.”

But the state already has a Pandemic Influenza Preparedness and Response Plan. The Pritzker administration signed off on Version 5.1 last March before the COVID-19 pandemic hit.

The plan doesn’t direct the governor to issue statewide stay-at-home orders, but does describe a legal process of quarantine orders for individuals or places with their consent or with a court order. [Illinois Department of Public Health] “has explicitly delegated its authority to order isolation, quarantine and closure to certified local health departments,” the plan says.

“No person may be ordered to be quarantined or isolated and no place may be ordered to be closed and made off-limits to the public, however, except with the consent of the person or the owner of the place or upon the order of a court of competent jurisdiction,” the plan states. “In order to obtain a court order, IDPH must prove, by clear and convincing evidence, that the public’s health and welfare are significantly endangered and all other reasonable means of correcting the problem have been exhausted and no less restrictive alternative exists.”

“Quarantine … is not effective in controlling multiple influenza outbreaks in large, immunologically naïve populations, because the disease spreads too rapidly to identify and to control chains of transmission,” the document says.

State Rep. Tim Butler, R-Springfield, said years ago he took part in planning sessions in anticipation of a pandemic. And with plans on the books, he said that makes some of the governor’s actions the past year baffling.

“It is astounding looking back on this that we really seem to either A not have a plan and B not abide by some plans that were in place,” Butler told WMAY.

Oversight is needed, he said.

“There could be a pandemic happening again in the near future, down the road, whatever, but we need to be able to plan for it and certainly learn from what’s happened over the last year,” Butler said.

Over the past year, Pritzker has unilaterally issued orders reshaping the state’s economy to slow the spread of COVID-19.

“Moving forward, Illinois will move towards normalcy with a dial-like approach, allowing us to dial it up as things are improving,” Pritzker said.

His new “bridge” to Phase 5 of his plan brings minor capacity increases when 70% of the elderly population gets vaccinated. A full reopening in Pritzker’s plan happens when 50% of people 16 and older get vaccinated.

Such economic restrictions aren’t detailed in the state’s plan that was in place before COVID-19.

“Certainly a governor of the state did not put us into what amounts to a gubernatorial takeover of the entire state or a monarchical government now instead of three branches of government,” Bryant said.

Plans are made so there’s a go-to playbook for everyone to follow along with, Bryant said. That’s something she said hasn’t been the case for the past 12 months.