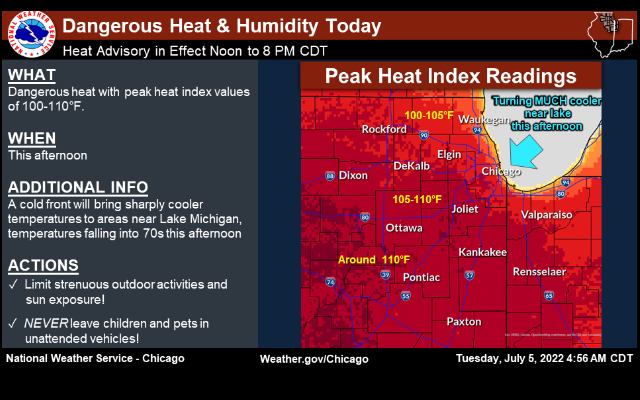 A dangerous heat wave will roast millions of Americans across the Plains and the Midwest this week. Parts of the central and southern Plains, the mid-Mississippi Valley, and the mid-South will see highs in the upper 90s to low triple-digits. A Heat Advisory in effect from noon today until 8 p.m. Peak afternoon heat index readings from 106 to 111.

Heat is one of the leading weather-related killers in the United States, resulting in hundreds of fatalities each year. Heat can be very taxing on the body; check out the heat related illnesses that can occur with even a short period of exposure. Everyone can be vulnerable to heat, but some more so than others. According to The Impacts Of Climate Change On Human Health In The United States: A Scientific Assessment the following groups are particularly vulnerable to heat; check in with friends and relatives who fall in one of these populations, especially if they don’t have air conditioning.

It is NEVER safe to leave a child, disabled person or pet locked in a car, even in the winter. If you have a toddler in your household, lock your cars, even in your own driveway.  Kids play in cars or wander outside and get into a car and can die in 10 minutes! A reported 25 children died in hot cars in 2020. To see the latest information for 2021, go to this link. Deaths routinely are reported as early as April and tragedies continue into December in southern states. 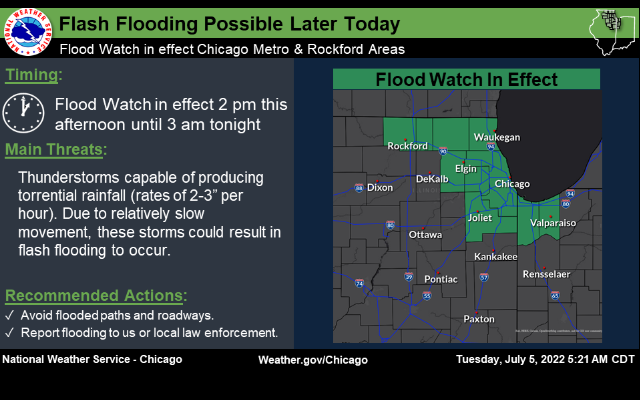 A Flood Watch is in effect from 2 p.m. today through late tonight.

* IMPACTS…Excessive runoff may result in flooding of rivers, creeks, streams, and other low-lying and flood-prone locations.

* ADDITIONAL DETAILS…
– Thunderstorms are likely to develop this afternoon into this evening. The more intense storms could produce extremely heavy rainfall, which could result in isolated rainfall totals in excess of 3 inches in less than 2 hours.
– http://www.weather.gov/safety/flood