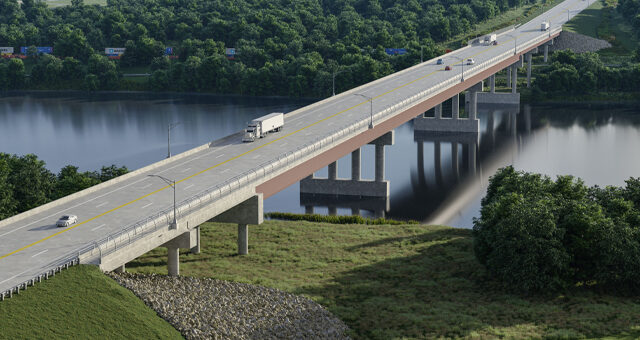 The privately financed project involves designing and constructing a new 1.5-mile-long highway extension, including a 0.4-mile-long bridge over the Des Plaines River. HRE-JV will finance, construct, operate, and maintain the bridge while collecting bridge tolls under a 99-year lease agreement with the City of Joliet. The project will provide a direct route between I-80 and CIC-Joliet, and the UP and BNSF Intermodal Facilities.

The project will deliver the following improvements:

“On behalf of the City of Joliet, this project has won our support and we’re happy to get it started, as it will be a big step forward to mitigating truck traffic on local roads,” said Bob O’Dekirk, Mayor of Joliet.

“We are excited to commence construction on the HRE Project. As the CenterPoint Intermodal Center has continued to grow and expand, we have focused our attention on finding innovative solutions for local infrastructure, improve truck traffic flow, enhance safety and reduce congestion in and around the Business Park,” said Michael Murphy, CenterPoint Properties’ Chief Development Officer.

The privately-funded project will create an alternative route from I-80 into the CenterPoint Intermodal Center (“CIC”). The new route provides direct access to I-80, rerouting truck traffic off local roads like Route 53, returning these roads to the residents and surrounding communities for their daily use, absent the congestion. The project, on the southern extension of Houbolt Road over the Des Plaines River, will be paid for, operated, and maintained by HRE-JV.