Hundreds Crowd No To NorthPoint Meeting in Manhattan 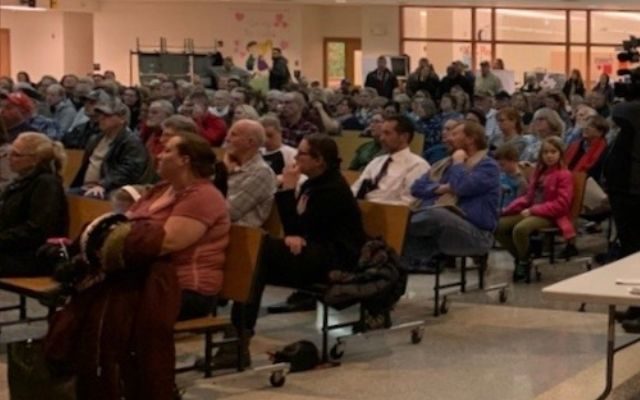 No to NorthPoint meeting in Manhattan Feb 10

Hundreds attended the Say No To NorthPoint meeting at a Manhattan elementary school on Monday night. The gist of the meeting was to give information about the the Compass Business Park planned for Joliet. Also to give residents the opportunity to put signs on their lawn opposing the warehouse trucking logistics park.

Erin Gallagher, community liaison is telling people at the Manhattan meeting that they need to reach out to their neighbors in Joliet. Gallagher says the Joliet City Council won’t listen to the residents of Manhattan but may listen to Joliet residents. She advises people to convince Joliet residents to attend City Council meetings in Joliet to make their opposition be known against the Compass Business Park.

The Joliet Plan Commission meets Feb. 24 to make a recommendation on NorthPoint’s proposal to annex 1,260 into the city for the Compass Business Park. The Joliet City Council meets on March 17, in which they could vote on the annexation of the land into Joliet.

The scope of the project to be annexed stretches from Slammers stadium to Joliet Junior College on Houbolt Road.

Two more Say No To NorthPoint town hall meetings will be held March 5th at the Knights of Columbus, 100 S. 129th Infantry Drive, followed by March 9 at the Croatian Club, 1503 Clement Street. Meetings begin at 6 p.m. followed by a presentation at 7 p.m.