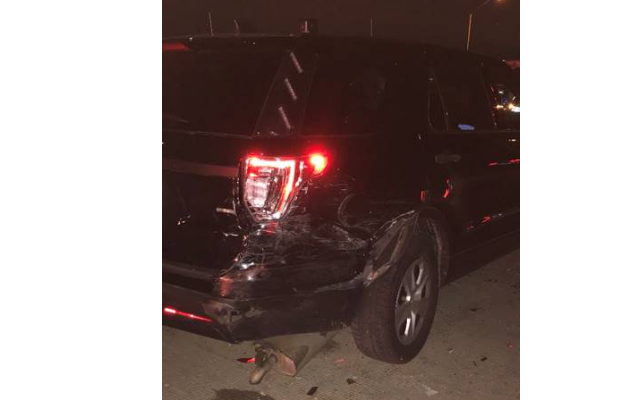 An Illinois State Police Sergeant was struck by a drunk driver while on a traffic stop.

An ISP District 2 Sergeant was stationary at the above location inside the squad car with emergency lights activated, on a traffic stop. A Dodge Ram, traveling northbound on Interstate 55 southbound, failed to yield to the stationary emergency vehicle and struck the rear passenger side of the ISP squad car. The driver of the Dodge, Porfirio Alverez Jr., a 34-year-old male of Hickory Hills, IL, was arrested for Driving Under the Influence of Alcohol and cited for a violation of Scott’s Law, along with other traffic violations. Neither Alverez nor the ISP Sergeant were injured in this crash.

“ISP Troopers work hard to protect the motoring public on Illinois roadways. We need the public to avoid putting their lives at risk by making responsible choices when behind the wheel. Always drive sober, pay attention and move over when you approach a stationary vehicle on the side of the road,” stated Commander Captain Linda Mandat.

So far this year, there have been ten ISP squad cars struck in relation to the Move Over Law and four Troopers have sustained injuries from Move Over Law-related crashes. The ISP would like to remind the public of the requirements of the Move Over Law, otherwise known as the “Scott’s Law”. When approaching an emergency vehicle, or any vehicle with their emergency or hazard lights activated, drivers are required to slow down AND move over. A person who violates Scott’s Law, commits a business offense and faces a fine of no less than $250 or more than $10,000 for a first offense. If the violation results in injury to another person, the violator’s driver’s license will be suspended for a mandatory period of anywhere between six months and two years. Additional information can be found at the following link: