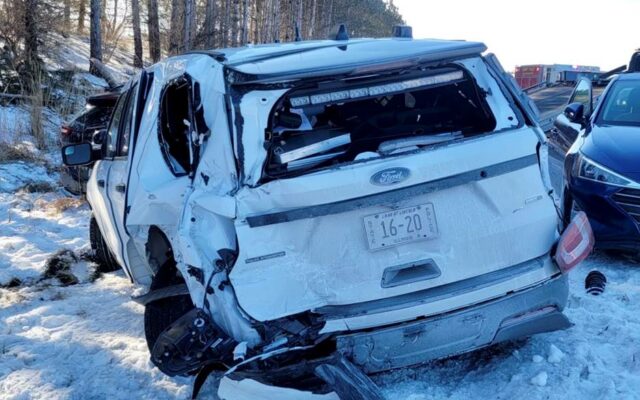 On the above date at approximately 9:00 a.m., a District 16 Trooper responded to the scene of crash at the above location. The Trooper pulled onto the right shoulder behind the crash located in the right ditch with the emergency lights activated. At approximately 9:37 a.m. a blue 2019 Hyundai approaching the scene lost control and spun into the rear of the Trooper’s squad car.  The vehicle from the original crash was not impacted in the crash.

The Trooper luckily did not sustain any injuries from this crash. The driver of the Hyundai, David A. Walker, an 18-year-old male of Malta, IL, complained of minor injuries.  Walker was charged with; a violation of Scott’s Law, Too Fast for Conditions and Improper Lane Usage.  A person who violates Scott’s Law commits a business offense and faces a fine of no less than $250 or more than $10,000 for a first offense.

The ISP would like to remind the public of the requirements of Scott’s Law, otherwise known as the “Move Over” law. When approaching an emergency vehicle, or any vehicle with their hazard lights activated, drivers are required to slow down and change lanes when it is safe to do so.

“Troopers risk their lives daily to protect the public.  We ask that you do your part by paying attention as you drive, and obey Scott’s Law,” stated ISP District 16 Commander, Captain Joseph Blanchette.  “These crashes are completely preventable, always drive sober and move over when you approach a stationary vehicle on the side of the road,” added Captain Blanchette.