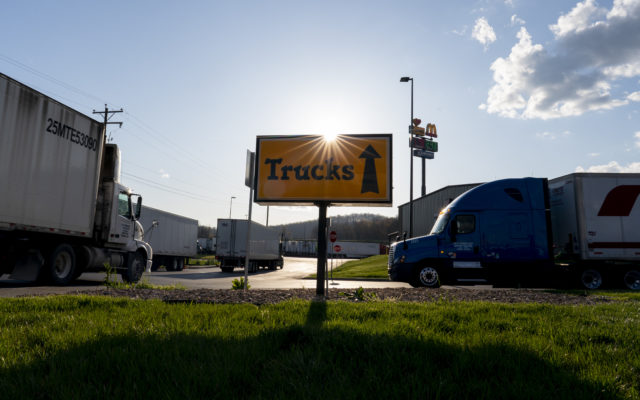 In this April 6, 2020, photo, semitrucks head to the truck parking lot at the Love's Travel Stop truck stop in Greenville, Va. During the coronavirus outbreak truckers continue to work so the supply chain is not disrupted. (AP Photo/Carolyn Kaster)

City of Joliet approves a new truck parking lot for the Ketone Business Center which will be on Route 6, located at the north end of Houbolt Road Bridge. The vote was 5-2. Councilman Larry Hug and Jan Quillman voted against it because they want the city to adopt rules for truck parking lots before approving any.

The Rock Creek Logistics Center owned by Ketone Partners, is on route 6 near Houbolt Road and they would like to expand their business center, east of the million square foot Target warehouse already open.

The truck terminal would include nearly 800 parking spaces for semi trailers and a truck maintenance facility.

The terminal according to Ketone’s attorney Mike Hansen, would be located under the soon to be built Houbolt Road bridge.

Hansen says the truck terminal is needed to be approved because Ketone has contributed to the 5-million dollar piece of property for the Houbolt Road bridge and has brought hundreds of jobs and thousands of tax dollars to Joliet. Hansen says, “there’s no better place in the city of Joliet for this use.”

According to their brochure, “Upon completion of the future Houbolt Road bridge, the site will be the last fueling/service/food stop for trucks exiting the intermodals traveling to I-80.