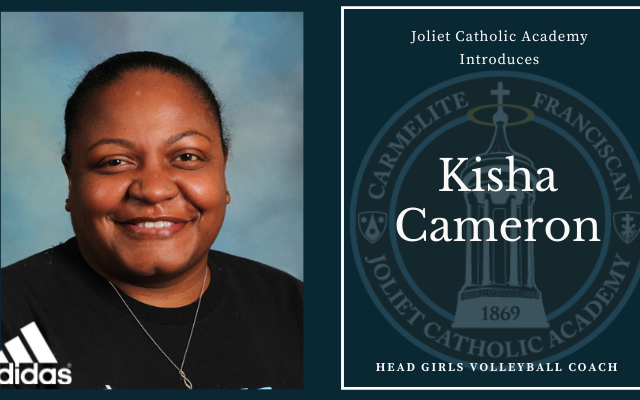 Joliet Catholic Academy’s administration is proud to announce the hiring of Kisha Cameron as the next head varsity volleyball coach, succeeding Hall of Famer Christine Scheibe. JCA athletic director Jim O’Brien, also new to his position taking over for longtime athletic director Dan Sharp, said, “I am very excited to have Kisha lead the girls volleyball program. She has coached at the high school and college levels for years. She takes over a program rich in tradition and I know she will do an excellent job. Most importantly, she will have a great impact on student-athletes, just as she has for our students in the counseling department.”

Cameron has spent the past three years as the head sophomore/junior varsity coach under Scheibe and was hired in August of 2020 as JCA’s Director of Diversity. A native of Topeka, Kansas, Cameron graduated from the University of Illinois-Springfield, where she played collegiate volleyball and received a B.A. in Psychology. From there, she continued her education and completed her M.A. in Professional Counseling at Argosy University. Her work experience includes years of providing crisis and trauma informed counseling, substance abuse and addiction treatment, individual and family counseling, and victim advocacy. She spent nine years as a head women’s collegiate volleyball coach at Joliet Junior College, an assistant women’s volleyball coach at Harper College, and has also coached for eleven years in the boys’ and girls’ programs for Ultimate Volleyball Club and Sports Performance Volleyball Club.

Cameron said, “I’m excited to build upon the success and tradition of JCA Angel volleyball under Coach Scheibe. The future is bright with the talent in our hallways, and we are happy to have most of the program’s staff returning. I’m also excited about some additions to the staff that will help us update our offensive and defensive systems.”

Under Scheibe over the past 21 seasons, the Angels have compiled a 602-198-10 record, won three state championships, finished second four times, and have captured ten IHSA state trophies. The Angels won 11 sectional titles, including six in a row from 2005 to 2010 and have won 17 regional titles, including 15 straight from 2001 to 2015. The program has produced several Division-1 standouts, including two-time NCAA All-American and 2005 Big Ten Player of the Year Sam Tortorello (Penn State), Olympic bronze medalist Kelly Murphy (Florida), 2009 Gatorade Illinois Player of the Year Annemarie Hickey (Wisconsin), and three-time WNBA All-Star Allie Quigley (DePaul/WNBA’s Chicago Sky) among the notables.