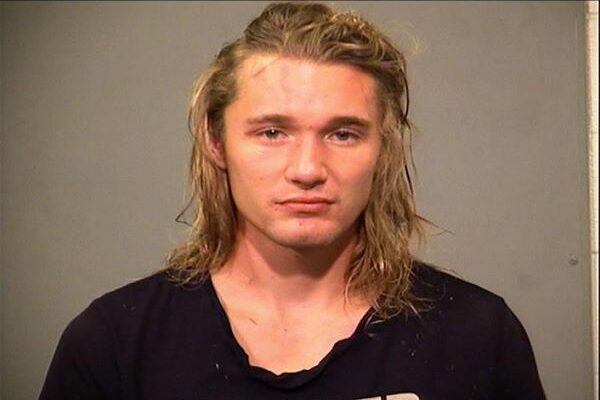 A 27-year-old Joliet man was arrested on Monday night after fleeing with a child in their arms. Kenneth Peterson has been charged with Aggravated Battery, Domestic Battery, Resisting a Peace Officer, Obstructing a Peace Officer, Criminal Damage to Property, Criminal Trespass to Motor Vehicle, and Endangering the Life or Health of a Child.

On August 9, 2021, at approximately 9:16 PM, Officers responded to a residence in the 100 block of Benedict Avenue for a report of a domestic disturbance. Upon arriving, Officers learned that a female had been battered by Peterson, the boyfriend of her sister. Further investigation revealed that an argument ensued after Peterson entered a vehicle owned by the victim’s sister at which time, he began repeatedly sounding the horn. The victim exited the house and removed the keys from the vehicle as Peterson had been drinking. Peterson exited this vehicle and then entered the victim’s vehicle without her permission. Peterson exited the vehicle at which time he struck the victim in the face and pulled her hair.

Peterson then approached the sister of the victim who was holding an infant child at which time he grabbed the child and fled on foot from the scene. Arriving Officers observed Peterson running while carrying the infant near Marmion Avenue and Webster Street. Officers gave chase at which time Peterson placed the infant upon the ground in front of a residence on Marmion Avenue and then continued to flee from Officers. Officers caught up to Peterson and placed him into custody after a brief struggle. The child was uninjured during the incident.