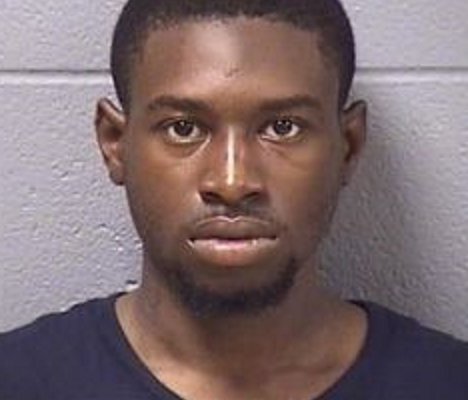 It was, at approximately 4:53 AM, that deputies from the Will County Sheriff’s Office were in the area of the 1100 block of Parkwood Drive in Joliet, following up on an incident that had taken place just one hour earlier. A deputy had attempted to make a traffic stop on a black Pontiac Grand Am on the Westside of Joliet.  The vehicle had fled from the traffic stop and deputies were attempting to locate the vehicle and suspect from the earlier incident.

Deputies located the suspect’s vehicle in an apartment parking lot, and observed a Black Male subject that fit the description of the registered owner, next to the vehicle.  The Will County Deputy announced himself and the suspect began to run from the deputy attempting to flee.  While running, the Stevens discharged the firearm, one time in the direction of the Will County Deputy. While fleeing from the deputy Stevens fell to the ground and a struggled ensued. During the confrontation a second shot was fired by Stevens.

He then began to bite the deputy’s hands, wrists, and arms in an attempt to gain control of the firearm.  Another Will County Deputy who was in the area heard the gunshots and assisted in taking Stevens into custody without further incident.  When interviewed by detectives, Stevens made numerous incriminating statements in regards to the incident.  The deputy involved in this incident was treated and released from a local area hospital for minor injuries.  Jason Stevens Jr is currently incarcerated at the Will County Adult Detention Facility awaiting a bond hearing.