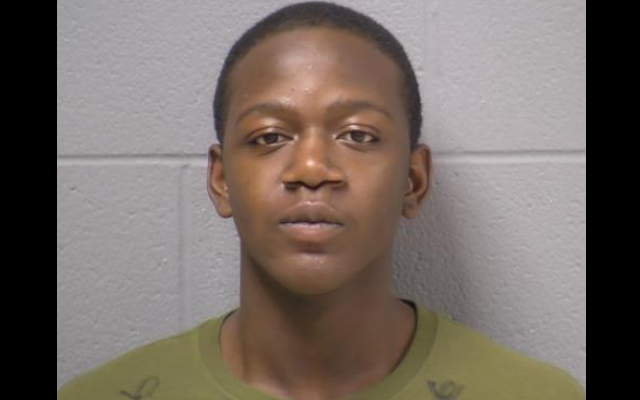 Joliet Police Officers responded to PS Fuel at 928 West Jefferson Street in reference to a report of a subject that had fired a handgun at a vehicle. Upon arrival, Officers determined that a male suspect produced a handgun after becoming involved in a verbal altercation with two adult female victims at the gas station. As the victims pulled away in a vehicle, the suspect fired the handgun at the vehicle, striking it near the tire. The suspect then fled the area on foot. Officers investigating this case identified 19-year-old Amarion Denwiddie as the suspect. Officers also determined that Denwiddie held two active Will County arrest warrants for Robbery.

During transport to the Joliet Police Department, Denwiddie began kicking the interior of a squad car while threatening to physically harm Officers, stating he was a kickboxer. While in the Joliet Police Department booking area, Denwiddie spat on an Officer and kicked a thermostat from the wall. Denwiddie continued to refuse to cooperate with the booking process and was transported to the Will County Adult Detention Facility.

Denwiddie (19, Joliet) was arrested, booked, and transported to the Will County Adult Detention Facility for Unlawful Use of a Weapon by a Felon, Possession of Controlled Substance, Aggravated Discharge of a Firearm, Aggravated Battery to a Peace Officer, Criminal Damage to Property to State Supported Property, Obstructing Justice, Obstructing Identification, and Two Will County Arrest Warrants for Robbery.

A male juvenile (18 – charged as juvenile) was arrested, booked, and transported to the River Valley Juvenile Justice Center for a Will County Failure to Appear Warrant for Criminal Trespass to a Vehicle.

A male juvenile (15) was arrested, booked, and transported to the River Valley Juvenile Justice Center for two Will County Failure to Appear Warrants. One for Possession of Stolen Motor Vehicle and the other for Fleeing and Eluding a Peace Officer.

Joliet Police Detectives working this case secured a search warrant for Denwiddie’s residence. Upon search of the residence, Detectives located cocaine and additional evidence connected to this incident.