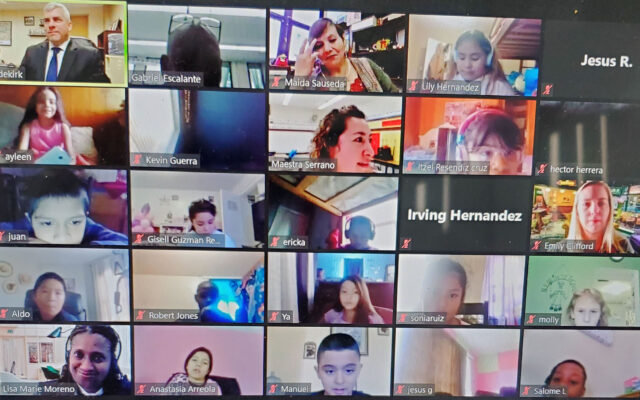 Students from four classrooms at A.O. Marshall Elementary School were treated to special guests during virtual lessons this week. Joliet Mayor Bob O’Dekirk and Joliet City Councilwoman Bettye Gavin joined the third grade students for their social studies lessons. The Mayor and Councilwoman both have visited several classrooms throughout Joliet Public Schools District 86, but never before via Zoom. The visits, arranged by teachers Emily Clifford, Gabriel Escalante, Maida Sauseda, and Vanessa Serrano, helped the students gain a better understanding on how the city of Joliet works. The students are currently discussing local government and laws in their My Community in Illinois social studies unit. Mayor O’Dekirk shared his job responsibilities and discussed the police, fire, streets, and water departments.

Councilwoman Gavin spoke about how she enjoys helping community members and connecting people to the resources that they need. The Councilwoman also explained to the students that she represents the neighborhood where they live and attend school. She also mentioned her favorite restaurant near the school where many children have visited. Students and teachers had a chance to ask the Mayor and Councilwoman questions too. In addition to learning how he became mayor, how much he makes being Mayor, and his overall job responsibilities, the students also were excited to learn that the Chicago White Sox is his favorite baseball team and that he plays the drums in a local band.