November 21, 2022) – Jawan Hall (25, Joliet) was arrested, processed, and transported to the Will County Adult Detention Facility for Criminal Trespass to Residence, Unlawful Restraint, and Battery. 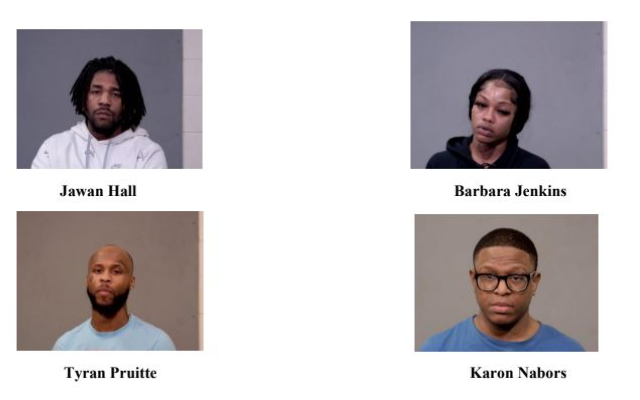 On November 19, 2022, at 2:26 AM, Officers responded to an apartment in the 700 block of North Center Street in reference to a disturbance that involved numerous unwanted individuals in
the apartment. Upon arrival, Officers were unable to make contact with anyone at the door of the apartment despite observing multiple people in the apartment from the outside.

Officers eventually made contact with the apartment’s tenant. It was determined that Nabors, Allen, and a 17-year-old male had come to the residence earlier in the evening. It was learned that Nabors was a family member of the victim. A short time later, Hall arrived at the residence with six additional individuals. At some point in the evening, Jenkins accused the male and female victims of stealing her purse at which time Hall began to fight with the male victim. The victims then demanded that everyone leave the residence. When the male victim attempted to leave the apartment to speak to arriving Officers, Hall pushed him back into a bedroom and refused to allow him to leave the apartment. A short time later, both victims were then able to exit the apartment to speak with Officers.

While the victims were outside of their apartment, the suspects that remained inside locked the door and refused to come outside, despite numerous commands from Officers. A short time later, all the suspects eventually complied and exited the residence, and all were placed into custody without further incident. It was learned that Pruitte held an active parole violation warrant from the Illinois Department of Corrections. While Officers completed a cursory search of the apartment, Officers located and recovered a 7.62 caliber handgun as well as ammunition. The ownership of the weapon is still under investigation.