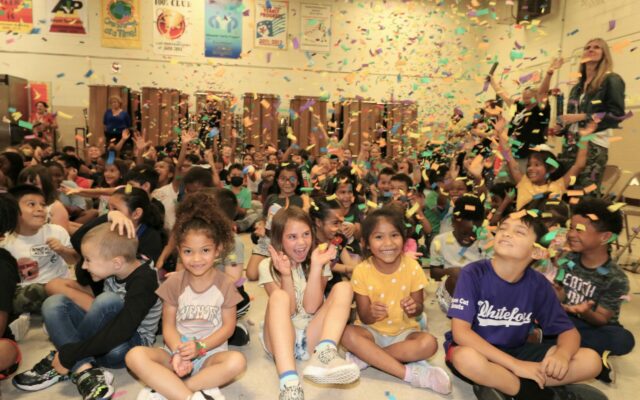 Schools are nominated for this national recognition by the state department of education and then school officials must complete a comprehensive application over several months to apply for the award. Eisenhower Academy was nominated as an Exemplary High Performing School.

“I applaud all the honorees for the 2022 National Blue Ribbon Schools Award for creating vibrant, welcoming, and affirming school communities where students can learn, grow, reach their potential, and achieve their dreams,” said U.S. Secretary of Education Miguel Cardona. “As our country continues to recover from the pandemic, we know that our future will only be as strong as the education we provide to all of our children. Blue Ribbon Schools have gone above and beyond to keep students healthy and safe while meeting their academic, social, emotional, and mental health needs. These schools show what is possible to make an enduring, positive difference in students’ lives.”

Eisenhower principal Nicole Bottigliero and a teacher will represent Eisenhower Academy at a two-day awards ceremony in Washington, D.C. on November 3-4, 2022, to celebrate their significant achievements. A community school celebration is scheduled at Eisenhower on November 15, 2022.

“I am so proud of the students and staff at Eisenhower for receiving this prestigious award,” said Dr. Theresa Rouse, Superintendent for Joliet Public Schools District 86. “The teachers, students, and parents work very closely throughout the school year to support learning.” Joliet District 86 held a surprise assembly in the gymnasium to announce the today’s award to Eisenhower
students and staff. The event was complete with confetti, music, and blue cupcakes!

Eisenhower Academy is one of two magnet programs within Joliet Public Schools District 86 and home to 229 students in grades first through fifth grade. Students are accepted into the school who demonstrate average or above academic achievement and positive behavior. In addition, parents must commit to the school’s philosophy, including the Four-Way Learning Agreement.