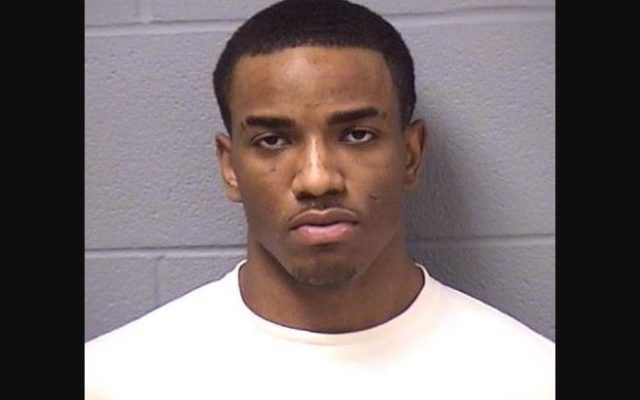 An 18-year-old Joliet man was arrested on New Year’s Eve on a charge of Financial Institution Robbery. It was on December 31st at 11:10 a.m. that officers responded to a holdup alarm at Merchants and Manufactures Bank located in the 600 blk of E. Cass Street. While enroute to the bank, Officers were informed that the bank had just been robbed and the suspect ran westbound Cass Street. Officers were able to determine that the suspect entered the bank and demanded money. The suspect appeared to have a handgun wrapped in a shopping bag and pointed the handgun at the employees. The employees gave the suspect money from the registers and the suspect fled the building last seen running westbound behind a building in the 500 blk of Cass Street. No employees were injured.

A K9 Officer responded to the scene and started a track from where the suspect was seen running. The K9 tracked to the rear door of a residence in the 500 blk of Cass Street, same as where the suspect was last seen running. A perimeter was setup around the residence. During the course of the investigation, Officers believed that Arus L. Woods, who resided at the residence, was involved in the Robbery. Officers were given consent to enter the residence and Woods was taken into custody without incident.

Officers got a search warrant for the residence which was then executed by Joliet Police Officers and the members of the FBI. Proceeds from the Robbery were located hidden inside a wall. Other items linking Woods to the Robbery were also located. Woods is also facing charges relating to an arrest on December 11th at the Joliet West/Central Basketball game on multiple firearm charges.