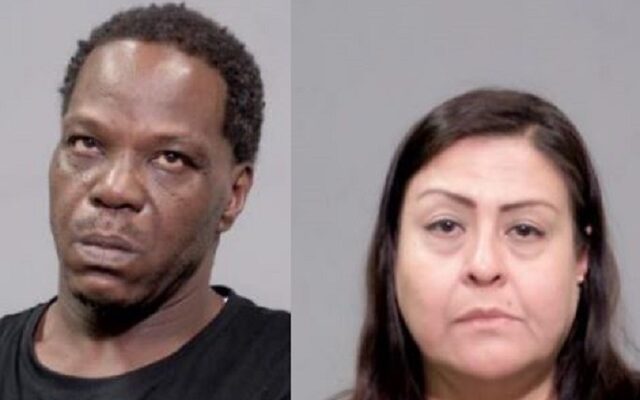 A traffic stop in Joliet on Saturday morning resulted in the arrest of a individual wanted by the Illinois State Police. It was at 2:15 am, Joliet Police pulled over a vehicle near Gardner Street and Linden Street after officers saw a vehicle nearly strike another car as it exited Eden Bar and Grill. Police then saw the car driving in the opposite lane of traffic. Once the vehicle was pulled over, 48-year-old Christopher Walsh exited from the driver’s seat and began yelling at Officers. While speaking to Walsh, police noticed behaviors consistent with alcohol impairment. Officers attempted to place Walsh into custody but he attempted to pull away from police. Authorities were able to secure Walsh without further incident. It was also learned on the scene that Walsh had a revoked driver’s license.

Police also arrested the passenger, 49-year-old Michelle Rodriguez, after it was learned that she had an active warrant from the Illinois State Police. The vehicle was towed from the scene and during a search officers recovered two loaded firearms in the center console, a 9mm handgun, and a .380 caliber handgun. The 9mm handgun’s serial number had been defaced. Both Walsh and Rodriguez were transported to the Joliet Police Department for processing.

Christopher Walsh was charged with being an Armed Habitual Criminal, Aggravated Unlawful Use of a Weapon (2 Counts), Aggravated DUI, Driving on a Revoked Driver’s License, Defacing Identification Mark of Firearm, Possession of Stolen Firearm, Unlawful Possession of Ammunition, and Resisting/Obstructing a Peace Officer.

Michelle Rodriguez was charged with Possession of a Controlled Substance.