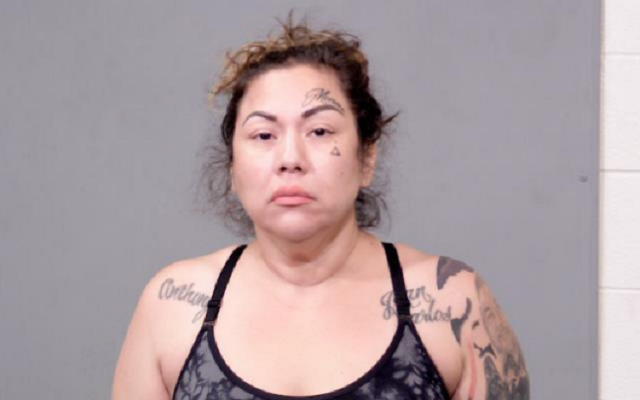 A Joliet woman has been arrested after police say she intentionally crashed into a house. On Friday, July 22, just before 5:30 pm, Joliet Police were called to the 1000 block of Elizabeth Street for a reported disturbance. Officers learned that 43-year-old Magdalena Campos had arrived at the residence in question and caused damage to the ex-boyfriend’s Honda Civic, shattering the rear passenger window and slashing a tire. A short time later, Campos drove back to the area of Hutchins and Elizabeth Streets. She then drove her vehicle off the roadway and intentionally crashed into a house in the neighborhood.

Two adults were sitting on the house’s porch and had to jump out of the way to avoid being hit by the car. Campos then took her vehicle and struck her ex-boyfriend’s Honda Civic. The ex-boyfriend suffered a minor injury while jumping out of the way to avoid being hit. After hitting the Honda, Campos attempted to flee the scene in her vehicle but hit a landscape wall. She then tried to leave the area on foot but was apprehended by police a short time later.

Campos was then transported to Ascension St Joseph Medical Center by the Joliet Fire Department for minor injuries. While at the hospital, she tried to leave the emergency room. As she made her way for an exit a hospital security guard confronted her, at which time Campos charged at the guard and pushed them in the chest. During a short struggle, she allegedly bit the guard on his arm. The hospital staff was able to return Campos to her room. A short time later, she was released from the hospital a short time later and was transported to the Joliet Police Department.