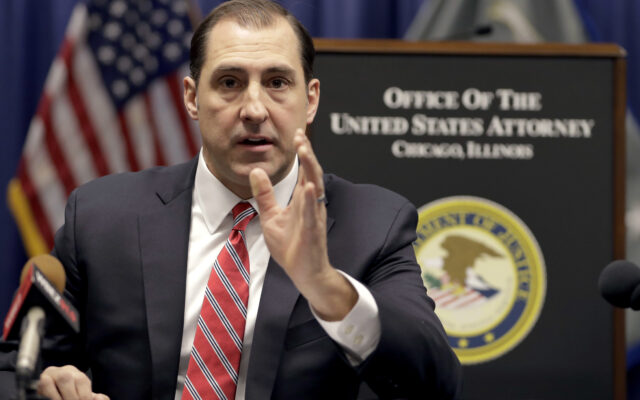 John R. Lausch Jr., the new U.S. attorney for the Northern District of Illinois, responds to a question during a meeting with reporters for the first time Wednesday, Jan. 24, 2018, in Chicago. Lausch says President Donald Trump never tried to speak to him before the president nominated him for the position and told reporters on Wednesday, that he has still not spoken to the president and has not been given any instructions by Attorney General Jeff Sessions to change the priorities of the office. (AP Photo/Charles Rex Arbogast)

The U.S. attorney who secured a 22-count indictment against former Illinois House Speaker Michael Madigan says there’s more work to be done. Northern District of Illinois U.S. Attorney John Lausch, a holdover from the Trump administration, stayed on after President Joe Biden took office at the behest of U.S. Sen. Dick Durbin, D-Springfield. As other U.S. attorneys that former President Donald Trump selected were leaving their posts to make way for Biden appointees, Durbin said Lausch was involved in important investigations and should remain. In the summer of 2020, Lausch’s office revealed a deferred prosecution agreement with utility ComEd, in which the company admitted to a bribery scheme involving several individuals and agreed to pay the government a $200 million fine. Madigan was labeled “Public Official A” in the ComEd document as the clear target of the federal corruption probe.

In Wednesday’s news conference announcing the indictment of Madigan on racketeering and other charges, prosecutors alleged Madigan’s political operation was a criminal enterprise that sought to keep the former speaker in power and  financially benefit himself and his associates. In announcing the indictment against Madigan Wednesday, Lausch said he will continue to be on the job as long as Biden allows.

“I was here as an assistant U.S. attorney for a number of years before I had the great fortune to come back in this job,” Lausch said. “I think we all shake our heads sometimes when we think that there’s another corruption case that’s happening. It happens with other crimes as well. And that’s why I’ve defined our problem as a very stubborn one.”

Despite Wednesday’s 22-count indictment against the longtime former speaker of the Illinois House, the investigation into political corruption under the dome in Springfield – and at city halls in Chicago and elsewhere – continues, Lausch said. He said some investigations take time and there isn’t much of a deadline other than the statute of limitation for some crimes.

“We follow the evidence where it leads,” he added. “Sometimes we get there more quickly than we think. Other times it takes us longer, and I think as you all know well, we’re pretty thorough and deliberate in this shop.”

While Madigan is the latest to face federal charges, he’s far from the first. The federal probe nabbed late former Democratic state Sen. Martin Sandoval, who pleaded guilty in early 2020 of taking bribes from red light camera vendors to effectively kill legislation regulating the industry. In a separate case, federal prosecutors arrested former Democratic state Rep. Luis Arroyo in 2019, who was charged with taking a bribe from a state senator believed to be former state Sen. Terry Link. Link was later charged with tax evasion. There’s also the pending charge against state Sen. Tom Cullerton, D-Villa Park, who’s accused of embezzling from a labor union. Cullerton resigned his job last week and is expected to plead guilty. Among Madigan’s inner circle, longtime clerk of the House and Madigan Chief of Staff Tim Mapes was charged in May 2021 with lying to the federal grand just investigating the speaker. And then there’s the connection to corruption within Chicago city politics. Longtime Chicago Ald. Edward Burke, among others, has pleaded not guilty to corruption charges in his own case

Lausch was asked Wednesday how long he’ll stay on the job.

“I can’t answer that,” Lausch said. “I serve at the pleasure of the president as the U.S. attorney and I’m honored to do so.”

Madigan has denied any wrongdoing.