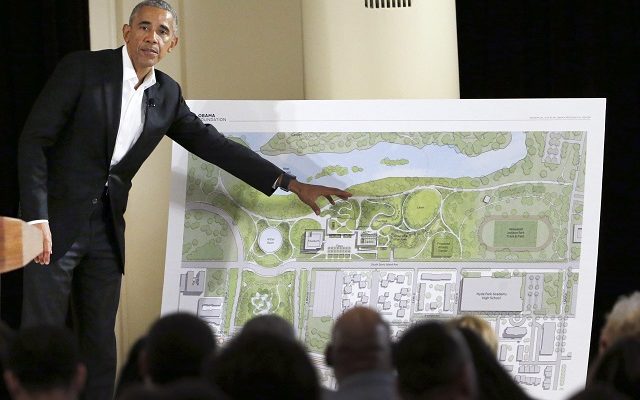 FILE - In this May 3, 2017, file photo, former President Barack Obama speaks near a rendering for the former president's lakefront presidential center at a community event on the Presidential Center at the South Shore Cultural Center in Chicago. Obama's foundation collected contributions of more than $1 million from 11 firms and individuals in the first three months of 2019, records show. The Obama Foundation's donor list, which is updated quarterly, included the AT&T Foundation and the W.K. Kellogg Foundation on Monday, along with other family trusts and foundations. The list also included foreign investors like Malaysian businessman Tony Fernandes, who is chief executive of AirAsia, and Rumi Verjee, who is a member of the British House of Lords. (AP Photo/Nam Y. Huh, File)

A federal judge is dismissing a lawsuit aimed at stopping the Obama Presidential Center from being built on Chicago’s South Side. The judge ruled Tuesday that the group Protect Our Parks fail to prove that the city’s park district improperly gave control of the land in Jackson Park to former President Barack Obama’s foundation. Construction is already underway at the site. The center is scheduled to open in the fall of 2025.