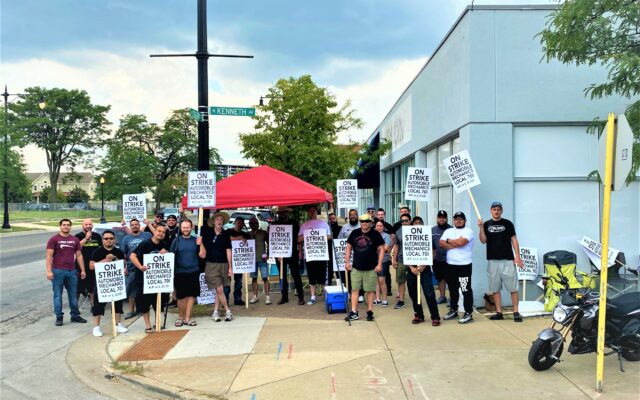 More than 800 mechanics represented by Automobile Mechanics’ Local 701 are on strike as of Monday, August 2nd. The strike affects more than 50 car dealerships in Chicago and the suburbs including Bolingbrook’s Advantage Chevrolet. Ronnie Gonzalez says one of the sticking points is base pay. Local 701 press release states that “The NCDC wants to make it easier to reduce a journeyman’s (top position) weekly guaranteed pay (like a weekly salary that is paid to a journeyman because he or she is at the dealership for 40 hours per week) if the journeyman is not meeting the dealership’s work expectations (such as generating enough income for the dealership to cover the journeyman’s pay), even if it’s not the journeyman’s fault.”

Beside health benefits the other main sticking point is the proposed language by the New Car Dealer Committee of Chicago (NCDC) that would undermine the bargaining process and allow them to cherry pick provisions from other contracts to favor NCDC.

The last time the union called for a strike was in 2017 and it lasted seven and a half weeks. Gonzalez says there is a shortage of skilled mechanics and skilled labor trades, and says their union helps with a training program to bring in new young talent and retain them.

No word on when their next negotiating meeting will take place.