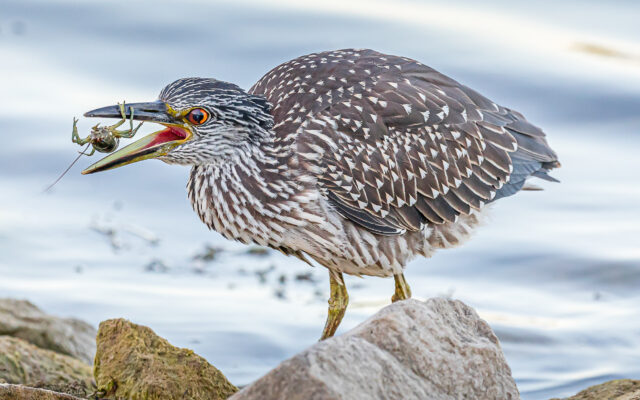 A Forest Preserve news story about a rare bird sighting at Whalon Lake helped Lockport resident Matthew Serafini win September's portion of the Preserve the Moment photo contest. Serafini headed to the Naperville preserve with a friend and snapped the winning picture of a yellow-crowned night heron just as it was about to swallow a crawfish.

A heron snacking on crawfish at Whalon Lake in Naperville won September’s portion of the Forest Preserve District of Will County’s Preserve the Moment photo contest.

The picture was snapped by Matthew Serafini of Lockport, who saw a Forest Preserve news story about a juvenile yellow-crowned night heron at the preserve and decided to check it out with a friend.

“I knew it was a fairly rare bird for the area, so I met up with a photography buddy of mine,” he said. “We went out and found the bird and had some great lighting. The little guy was mainly hunting crawfish. In the hour I spent with the bird, we probably saw him eat four to six crawfish and one small catfish. Awesome little hunter.”

Photo contest judges were impressed with the picture’s crispness and the lighting as well as the way it captured the exact moment the heron was about to ingest the crawfish.

Serafini said he grew up in the Homer Glen area and has always enjoyed being outdoors and visiting the preserves.

“Two years ago, I self-taught myself about photography,” said Serafini, who works in banking. “I always saw such cool things while hiking, I figured why not try capturing these things on camera. Been having a blast ever since.”

You can view all of September’s photo contest entries on the District’s Flickr page, Flickr.com/WillCoForests.

Monthly photo contest winners receive $75 gift cards. Overall winners chosen in January will receive MasterCard gift cards worth $500 for first place, $250 for second place and $150 for third place. The photo contest is sponsored by The Nature Foundation of Will County.

Photos must be taken by amateur photographers age 18 or older, and they must be snapped in a Will County forest preserve after the May 1 contest start date. Please read all photo contest rules and photo upload instructions at ReconnectWithNature.org before entering the contest.