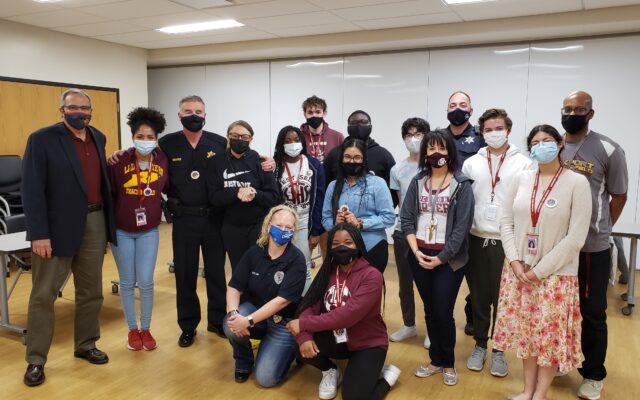 On May 7, 2021, Lockport Township High School hosted its final Student – Police Forum for the school year. The journey to this engagement began last summer with a handful of students. With the backdrop of national racial discord, a group of Lockport high school students came together to form the Student Equity Action Committee (SEAC). The students recognized the importance of communicating with the police to gain insights into police perspectives and to build positive relationships between the school and law enforcement communities.

The Student – Police Forum was an initiative that began with conversations between Lockport Police Chief Terry Lemming and LTHS Superintendent Robert McBride. In Dr. McBride’s view,  “Teens and police rarely have an opportunity to get to know each other in thoughtful situations. The purpose is to build mutual understanding.”  The SEAC and the Lockport Community Outreach Officers Jeren Szmergalski and Kevin Brauch first met virtually in November. The officers spent time discussing what their job entails and students gained a better understanding of the demands on police, the challenges, and the culture of the police.  In subsequent forums, which included school resource officers, they delved into news headlines and events involving police, the importance of equity training, social media, mental health, use of force, and safety issues.

Both students and police officers have developed a genuine respect for one another and appreciate the productive dialogue they’ve begun. They plan to continue engagement next school year, including inviting police officers to school events. “There’s definitely a significant amount of work that still needs to be done,” remarked LTHS senior Alisha Thomas, “but as students, we’re hoping that these local forums will serve as a way to model the sense of empathy between law enforcement, community members, and youth that we hope to see on a national level one day.”