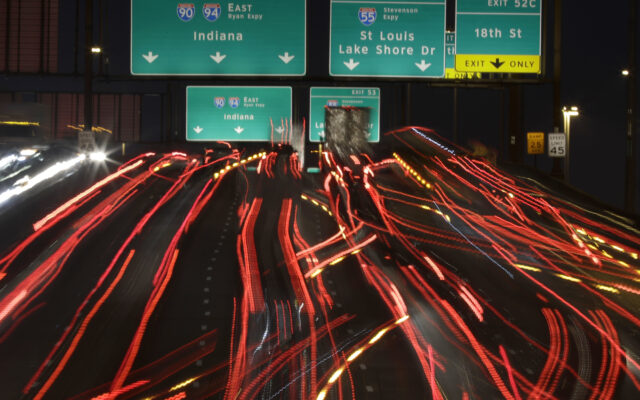 FILE - Motorist traveling southbound on Interstates 90 and 94 for Indiana approach the intersection with Interstate 55 for St. Louis, Dec. 21, 2017, in Chicago. The $1 trillion infrastructure bill that President Joe Biden signs into law on Monday, Nov. 15, 2021, represents a historic achievement at a time of deeply fractured politics. But the compromises needed to bridge the political divide suggest that the spending might not be as transformative as Biden has promised for the U.S. economy. (AP Photo/Charles Rex Arbogast, File)

A man is dead after he fell from an overpass on the Dan Ryan Expressway on Chicago’s South Side.  State police say several vehicles collided on I-90/94 early Saturday near 26th Street.  David Ponce De Leon witnessed the crash and pulled over to the shoulder.  He was standing near his car when another vehicle swerved around the previously crashed vehicles and hit De Leon’s car, which caused him to fall over a concrete wall and onto the roadway below.  De Leon died at the scene and the driver who hit his vehicle was cited for failure to reduce speed to avoid a crash.