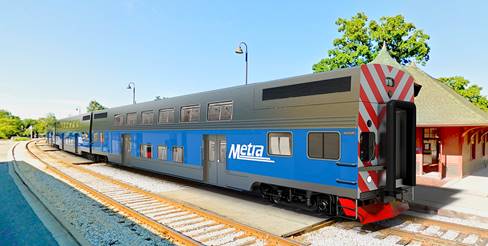 The Metra Board of Directors has announced that they have approved the purchase of up to 500 state-of-the-art railcars from Alstom Transportation Inc., opting for new multilevel cars that will be more comfortable, accessible, reliable and safe than the outdated gallery cars they will replace. About 40 percent of Metra’s current fleet of 840 cars are rated in marginal or poor condition, although they are still safe to operate. The new cars will offer increased reliability, while reducing operating costs – a substantial improvement over the increasing expense of maintaining the older cars.

This acquisition has been part of Metra’s Board plan since 2014. The new cars will have stainless steel bodies and be compatible with Metra’s existing fleet, which means they can be coupled to current cars. They will also feature many reliability and safety upgrades, including a microprocessor-controlled braking system, electrically operated doors and passenger area cameras.

The initial order will be for 200 cars. Metra will have the option to buy up to 300 additional cars for up to $1.8 billion total. The cars specified in the contract are a customized version of Alstom’s Coradia Duplex model and will be built at their Hornell, N.Y. manufacturing facility. It should be noted that Alstom is an Illinois company headquartered in Naperville. The company indicated that a third of the railcar contract value will be provided by Illinois-based suppliers. The first car is expected to be delivered 42 months after the contract is finalized, with the full base order complete 30 months later.