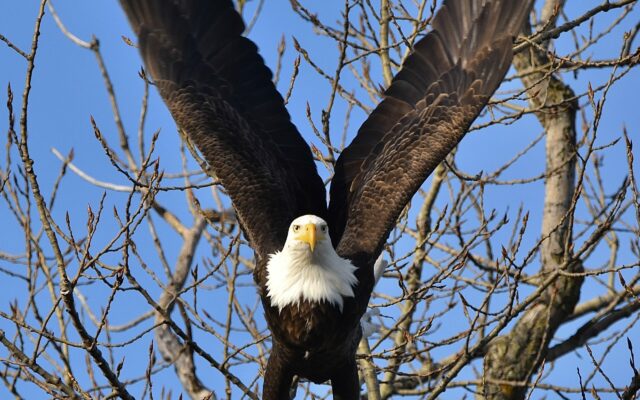 Naperville resident Bertrand Leclercq snared a victory in November's portion of the Forest Preserve District of Will County’s Preserve the Moment Photo Contest with a picture of an eagle taking off in flight at McKinley Woods in Channahon. One more monthly winner will be chosen after the contest concludes on Dec. 31 and overall 2022 contest winners will be chosen in January. For more information on the contest, including rules and submission instructions, visit ReconnectWithNature.org. (Photo courtesy of Bertrand Leclercq)

An eagle with outstretched wings in the shape of a “V” signaled a victory for photo contest participant Bertrand Leclercq of Naperville.

Leclercq won November’s portion of the Forest Preserve District of Will County’s Preserve the Moment Photo Contest, which began in May. His stunning photo of an eagle lifting off from a branch at McKinley Woods preserve in Channahon was one of five photos selected by judges from all entries. The five photos were voted on by members of the public on the District’s Facebook page. Leclercq said he enjoys going into Will County forest preserve to take photos.

“I take long walks alone with my camera and it’s very relaxing after a busy work week (I work as a chef),” he said in an email after being notified of his win. “I feel truly connected with nature in these beautiful preserves, in particular McKinley Woods – Frederick’s Grove where I took this photo. The wildlife in this preserve is truly amazing and rich, and perfect for great photo opportunities: bald eagles, pileated woodpeckers, red-headed woodpeckers, and so many more rare bird species.”

The other finalists for November were: Carlos Molano of Chicago for a photo of a pelican hovering above the water and Greg Winkelmann of Romeoville for a colorful photo of an American goldfinch perched on a flower, a merlin clutching a bird in its talons and fall leaves floating in the water.

One more monthly winner will be chosen for December before the Forest Preserve District’s 2022 contest concludes on Dec. 31. Monthly winners each receive a $75 Visa gift card and all entrants receive a participation gift.

Overall contest winners will be chosen in January from among the eight monthly winners, with $500, $250 and $150 Visa gift cards to be awarded for first, second and third place, respectively. Three random drawings also will be held for all contest participants and those three winners will each receive a $75 Visa gift card. All prizes are funded by The Nature Foundation of Will County, willcountynature.org.

For more information on the contest, including rules and submission instructions, visit ReconnectWithNature.org. To view all prior photo contest entries, visit the District’s Flickr account, Flickr.com/willcoforests.