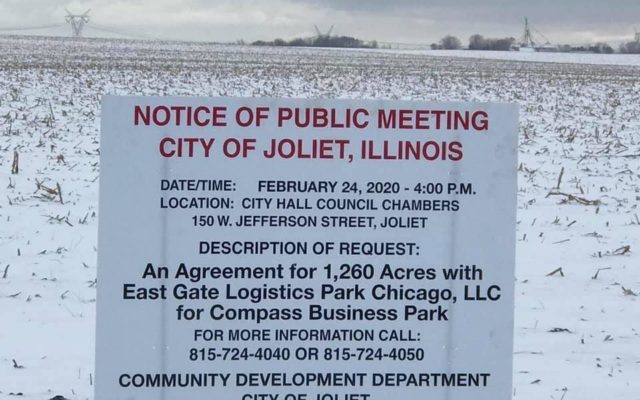 A posted sign on a huge parcel of land alerts the public to a special meeting of the Joliet planning commission to consider an annexation agreement. Notice of a public meeting in the City of Joliet will take place on February 24th at City Hall Council Chambers at 4 p.m.

NorthPoint wants to annex more than 12-hundred acres to build their Compass Business Park. NorthPoint missed the regularly scheduled planning and zoning meeting as their application was not complete. Sources tell WJOL that the current application for annexation has been labeled as a “pre” application. If the committee gives the green light to the annexation then the Joliet City Council could vote on the warehouse and trucking facility in March.

The footprint would stretch from the downtown baseball stadium to Joliet Jr. College on Houbolt road. The area bound by Joliet to north, Manhattan to the east and Elwood to the west.

Say No To NorthPoint has been holding town hall meetings. Last week in Manhattan, nearly 400 people attended the informational meeting. Truck traffic is already a problem in Will County and adding another inland port would make travel in Will County less safe and prohibitive.

Two more town hall meetings will be held March 5th at the Knights of Columbus, 100 S. 129th Infantry Drive, followed by March 9th at the Croatian Club, 1503 Clement Street. Meetings begin at 6 p.m. followed by a presentation at 7 p.m. The Joliet City Council meets on March 17, in which they could vote on the annexation of the land into Joliet.