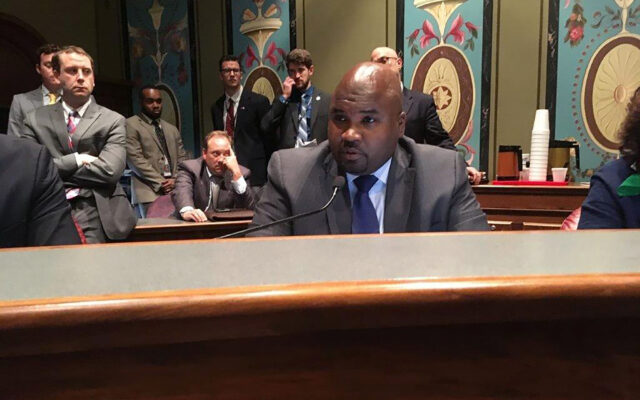 Sen. Elgie Sims, D-Chicago, discusses the proposed budget in a committee hearing in this Wednesday, May 30, 2018 photo, in Springfield, Ill. Sims on Tuesday, Oct. 26, 2021, won Illinois Senate approval of legislation to repeal a 1995 law requiring that a parent or guardian be notified at least 48 hours before a girl younger than 18 undergoes an abortion. The bill now moves to the House with two days left in the Illinois General Assembly's fall session. (AP Photo/John O'Connor)

Wednesday marked the repeal of parental notification of underage abortion in Illinois, and each side of the argument is making their position known.

The 1995 parental notification law didn’t go into effect until 2013 after years of litigation. The law allowed for a judicial bypass of the notification requirement.

At a campaign stop in East St. Louis Wednesday, Pritzker promised to keep abortion legal in Illinois, even for girls without their parents being notified.

In 2020, more than 9,600 out-of-state residents terminated their pregnancy in Illinois, according to the Illinois Department of Public Health. More than 6,500 were from Missouri.

Pritzker also contrasted his position with the six Republicans vying for the GOP gubernatorial nomination.

“Every Republican running for governor of Illinois this year wants to make Illinois an anti-choice state, every single one of them,” Pritzker said.

At a separate news conference in Chicago, Aurora Mayor Richard Irvin responded directly to the governor.

“It’s a shame that J.B. Pritzker is using something that is such an important issue for us to be talking about as political fodder,” Irvin said. “He does not have anything other to talk about than trying to make something like that about politics.”

Irvin, who faces five other Republicans that have all been vocal against Illinois’ liberal abortion polices that include elective abortions using taxpayer dollars, said Pritzker is distracting from his failures on high taxes, corruption and crime.

“He wants to talk about things that are already determined to be codified law in the state of Illinois,” Irvin said. “He is using that as politics.”

The ACLU of Illinois praised the end of parental notification.

“Prior to today, pregnant young people could make any medical decision without barriers except abortion,” said Emily Werth, staff attorney at the ACLU of Illinois. “Now thankfully they have the same right to make a confidential decision about their health care as everyone else. Today abortion is treated just like all other forms of health care in this state.”

March For Life Chicago Director Kevin Grillot said the repeal of parental notification takes the rights of parents away and makes Illinois an outlier.

In 2020, the Illinois Department of Public Health reports 1,180 girls under the age of 18 had a pregnancy terminated. Of those, 88 were younger than 15.

He expects more people will come to Illinois for an abortion.

“This is something that is very dangerous for someone say their older boyfriend that wants to push this young girl into having an abortion that got pregnant, they can now just travel across the state line, there’s not regulations in place in Illinois for that,” Grillot said. “So, you’re going to see a number increase.”