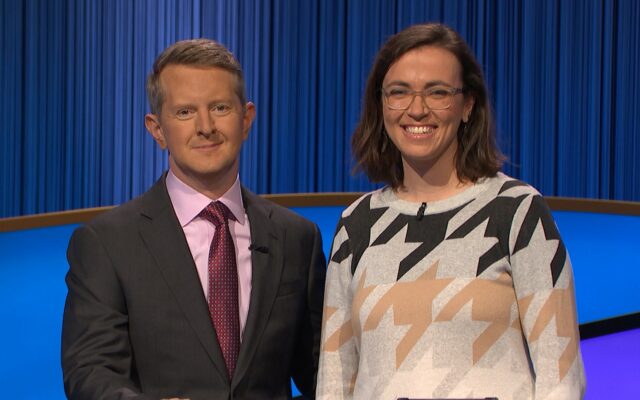 Erin Portman with Jen Jennings on the set of Jeopardy

Plainfield East High School English teacher Erin Portman will appear on “Jeopardy!” on Wednesday, January 18, 2023. A life-long fan of trivia-style games, Portman has been a loyal watcher of the show since she was a child.

“My family and I enjoyed watching and knowing the answers,” Portman said. “It was exciting when I was a kid to know an answer before my parents.” Portman’s journey to Sony Pictures Studio in Los Angeles began more than two years, when she took an online quiz on a whim during the COVID-19 pandemic. The initial quiz was followed by more online quizzes testing her knowledge in 50 categories, an invitation to a Zoom interview with producers and finally a mock game with other “Jeopardy!” hopefuls.

So, in May 2022, Portman decided to start the audition process all over again. This time luck was on her side. Last October, she received a call notifying her she had been selected to appear on “Jeopardy!.” Four weeks later, Portman flew out to Los Angeles with her parents and godmother to film the show.

Portman can’t say how she did on the show until after the episode airs. She can share her behind-the-scenes experience. “The whole “Jeopardy!” crew is just incredible,” Portman said.

There is a whole fleet of people whose entire job is to take care of the contestants, she said. “You don’t have to think the entire day except when you’re trying to remember trivia,” Portman said. “It was very relaxing and enjoyable.” “Jeopardy!” tapes multiple shows a day, so a contestant may be a multi-day winner and still wrap up all their tapings in one day.

The show is hosted by Ken Jennings and Mayim Bialik. “Ken is very funny, cracking jokes in taping breaks and when he was answering audience questions,” Portman said.

All contestants cover their own flight and hotel accommodations, but all players win something regardless of where they place, she said. Her students think it’s exciting she will appear on the game show.

“Many of my students are big fans of the show and were excited to tell their parents,” Portman said. “But some students told me they’ve never watched it before, and I had to explain the basic
premise of the show.”

Portman hopes her students can learn from her experience. “Find what you’re passionate about and commit to it,” she said. “Worst case scenario you just try again. Best case scenario things work out great and you have the skills already that you need to be successful.”