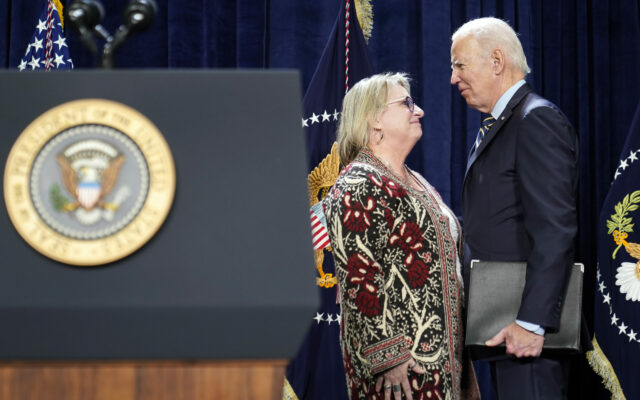 President Joe Biden talks with Audree Hall after he was introduced to speak on Saturday, Nov. 5, 2022, at Jones Elementary School in Joliet, Ill. (AP Photo/Patrick Semansky)

It was a busy weekend of campaigning in Illinois ahead of Tuesday’s midterm election.

Friday, President Joe Biden arrived in Illinois to campaign for two incumbent Chicago-area Democratic members of Congress. Saturday at an event in Joliet, when talking about social security as a safety net for senior citizens, Biden addressed protesters.

“I love those signs when I came in. Socialism,” Biden said. “Give me a break. What idiots. Socialism.”

Pritzker held his own events around the state. Later Saturday, he called publications being sent across the state critical of the SAFE-T Act “B.S.” Earlier Saturday in Aurora, he used the expletive term after checking for any children in the room.

“So, I just want you to know when you’re talking to people at the doors, or you’re picking up the phone and you’re calling voters, and they’re asking you about this, you can say two things. One, complete [expletive]. And two, Pritzker and [Lt. Gov. Juliana Stratton] are fighting to keep people safe in their neighborhoods,” Pritzker told supporters.

Pritzker defended the measure he enacted which eliminates cash bail statewide on Jan. 1.

“There’s nobody, nobody in the state legislature, there’s nobody in the governor’s office, none of us want to let violent criminals out of jail. That is not what the SAFE-T Act does,” Pritzker said in DuPage County.

Pritzker’s get-out-the-message has been “are you ready for the fight?”

“And this farmer can see that a pandemic of sophisticated wokeness is killing our way of life,” Bailey said. “I will not give up on Illinois. I will continue to stand for Illinois and the question I have is will you stand with me?”

Libertarian gubernatorial candidate Scott Schluter is also on the ballot.

The election is Tuesday.