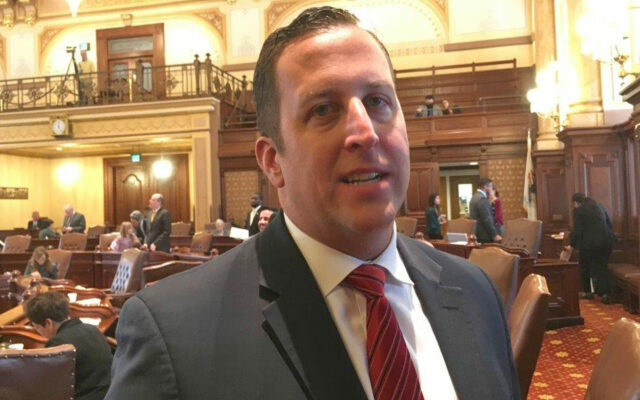 In this Nov. 29, 2018 photo, Illinois Sen. Michael Hastings, D-Tinley Park, speaks at the Capitol in Springfield, Ill. Hastings discusses a law he sponsored that requires jailhouse informants who plan to offer testimony against defendants in criminal trials to undergo a pretrial hearing by a judge who will assess the informants' credibility, the benefits he or she expect to get in exchange for testimony, and the informant's history of turning state's evidence. Lawmakers are concerned about people wrongly convicted of crimes based on testimony from jailhouse "snitches" who are later exonerated. (AP Photo by John O'Connor) (AP Photo by John O'Connor)

Governor Pritzker is calling for two state senators to resign. The governor demanded the resignations of Emil Jones the third of Chicago and Michael Hastings of Frankfort. Jones faces federal bribery charges over allegations he accepted a five-thousand-dollar bribe from a red-light camera company executive to block unfavorable legislation, while Hastings has been accused of domestic abuse by his estranged wife. Pritzker said both should resign from office, adding that “corruption and abuse have no place here.”