Pritzker, GOP at odds over the difference between tax incentives, corporate loopholes 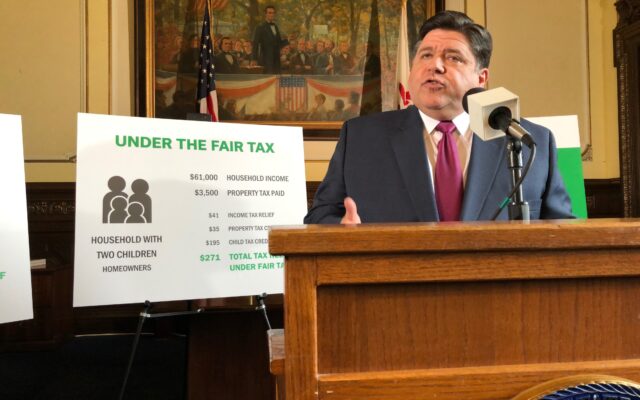 Gov. J.B. Pritzker outlines his plan to replace Illinois' flat-rate income tax with a graduated structure with rates ranging from 4.75 percent to 7.95 percent, depending on income, at a state Capitol news conference on Thursday, March 7, 2019 in Springfield. The Democrat says his plan would generate $3.4 billion in additional revenue, make the wealthy pay more, and would keep tax bills the same or make them lower for 97 percent of filers. Only six states have flat-rate income taxes. (AP Photo/John O'Connor)

One person’s tax incentive is another person’s corporate loophole.

As state lawmakers craft a budget behind closed doors in working groups in advance of the May 31 deadline, Gov. J.B. Pritzker has been advocating lawmakers either limit or close various tax incentive programs he’s characterized as loopholes.

Pritzker defended supporting credits for some incentives over others.

Pritzker’s proposed budget relies on nearly $1 billion in new revenue from closing or limiting a slew of what he has called corporate loopholes.

The governor expressed support for some tax credit programs, such as extending the Film and TV Tax Credit.

“That’s just one example,” Pritzker said. “The Data Center Tax Credit (is another), these were things that I advocated for, either the extension of or the creation of.”

But, among the list of incentives he’s looking for lawmakers to close is the Illinois Blue Collar Jobs Act. That was passed with bipartisan support and enacted by the governor in 2019. State Rep. Tom Demmer, R-Dixon, said that was supposed to take effect in January this year.

“He’s just chosen not to implement, not to have an application, not to start the program,” Demmer said. “I’ve been asking for further clarification from the governor’s office under what authority do they have to simply ignore a law that’s already on the books and there haven’t been very good answers so far.”

The governor’s office did not return messages seeking comment.

Demmer said the governor is “talking out of both sides of his mouth.”