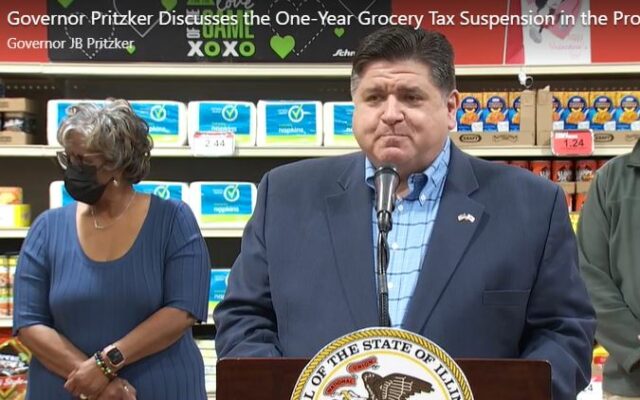 Illinois’ average price per gallon of regular gas is now a full dollar more than neighboring Missouri, driven mainly by the state’s gas and sales tax on top of the cost of fuel. Some want a special session of the state legislature to take more action.

The average price of regular gas in Illinois Wednesday was $5.53 a gallon. Illinois’ average Wednesday is a full dollar more than a month ago and $2.20 more than a year ago. The national average was $4.95.

Gov. J.B. Pritzker said the increased price of gas is a global market problem, saying a lot of the increase is because of the Russian invasion of Ukraine and inflation. Gas prices started rising well before war in Ukraine, and many blame Biden’s green energy agenda placing more restrictions on the oil and gas industry.

“I don’t think anybody expected that we’d be here with regard to gasoline prices,” Pritzker said at an unrelated event in Springfield Wednesday. “Like you, I drive by the signs, you know, or pull into a gas station and feel it with, you know, where you’re talking more than $5 in many places, and now I see that there are places in the country where they’re at $6 or $7 or $9.”

In Missouri, the average price was $4.53 as of Wednesday, according to AAA. Of all Illinois’ neighbors, Illinois’ average was the highest. Indiana’s average was $5.23.

One thing that does drive Illinois gas prices higher than other Midwest states is the state’s high gas taxes, which are the second highest in the nation, according to the Tax Foundation. Illinois lawmakers on a bipartisan basis approved doubling the state’s gas tax from 19 cents to 38 cents a gallon in 2019. The measure also tacked on an annual increase tied to inflation. That is on top of the federal gas tax, and any county or municipal gas tax some Illinois taxing bodies can put on top. Wirepoints recently calculated that drivers filling up in Naperville pay a total of 98 cents a gallon in taxes when all taxes are considered.

State Rep. Mark Batinick, R-Plainfield, said there should be a special session to cap the sales tax Illinois places on top of the motor fuel tax drivers pay filling up at the pump.

“This really needs to be done,” Batinick told WMAY Tuesday. “Gas is getting out of control and the idea that government is making a windfall [from a percentage of sales tax on the increase fuel price] on the backs of the middle class and poor is really disheartening.”

Pritzker wouldn’t answer whether he’d call for a special session. He did point to the tax package lawmakers approved in the spring that sends income and property taxpayers rebates and temporarily nixes the grocery tax in the upcoming budget year, though rebates aren’t expected for months.

“Remember, we’re providing hundreds of dollars of relief directly to families that they can use for precisely this purpose, they can use it for anything they want, groceries or something else,” Pritzker said. “And they’re able to use that in addition to the cessation of the increase in gas tax in order to pay for gasoline.”

Illinois’ annual gas tax increase of around 2 cents a gallon that was set for July 1 has been delayed until Jan. 1, as part of that package. That does not impact the sales tax cap proposal Batinick is wanting to advance.

Separately Wednesday, state Rep. Adam Niemerg, R-Dieterich, said the high gas prices are hurting rural Illinoisans the most because they have to drive further distances. He urged the legislature to be called back to session to take up his measure to suspend all the state’s gas tax for a period of four months, for a savings he said would be around 44 cents a gallon.

“We have $4.5 billion in surplus that was due to inflationary budgeting,” Niemberg said. “We have more in motor fuel tax coming in this year than last year. It’s time to act for the people.”

Niemerg stood with state Sen. Darren Bailey, R-Xenia, who is looking to win the GOP nomination to take Pritzker on in November. He faces five other candidates in the June 28 primary.

“But as Senator Bailey knows, we’ve taken steps to freeze the gas tax and continue to explore additional options for relief for families dealing with the effects of global instability,” a spokesperson said.

“While we examine what else could be done here, I hope the senator and his allies will join the millions of Americans across this great country in calling on Washington to stand up to foreign oil interests, get to work and finally do something to address this national gas price problem,” Paterson said.